Turbowolf bassist Lianna Davies tells us how her time at ICMP helped her become one of rock music's best bassists... 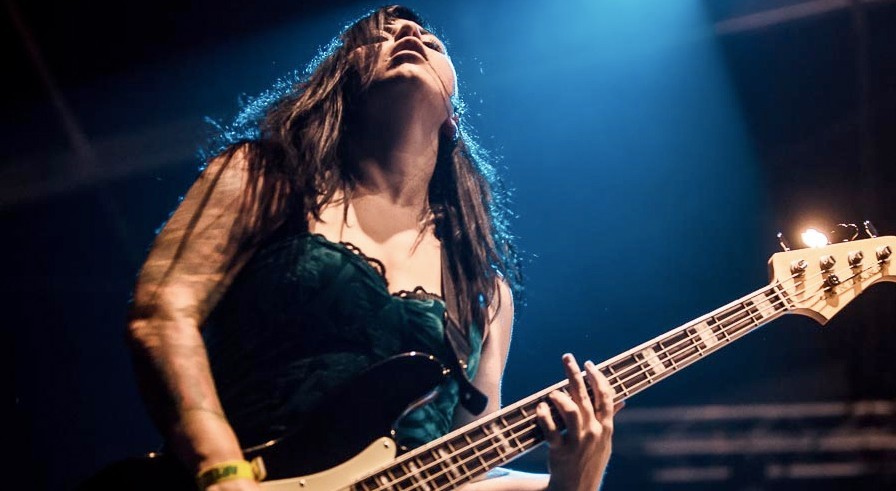 As female bass players go, ICMP graduate Lianna Davies is one of the most well respected and hardest working in the music industry.

Lianna has enjoyed a life in music, starting via a love for David Bowie as a kid before discovering the likes of Bikini Kill, Hole and Fugazi. She went on to study with us here at ICMP and hone her bass chops via various rock bands including Pettybone and now the brilliant Turbowolf. With the group gearing up to release their new album, 'The Free Life', this Friday (9th March) and head out on tour with Royal Blood, we caught up with Lianna to learn more about her musical journey into the world of rock and roll...

When I was a small child I was always interested in performing and arts but then I discovered David Bowie and I knew that music was the path I wanted to take … he’s always been a major influence on anything I do. I tried out to play guitar at school at a very young age but I was turned down as I was ‘too small’.

It properly began when I went to high school and discovered punk. Bands like Bikini Kill and Hole where I realised that I could do it too from seeing other females in bands."

Then, by getting a part time job at a local record shop (which also exposed me to all kinds music), I saved and saved to buy a guitar. I was more into playing guitar when I was younger, I made the switch to bass at a much later age. Once I bought a guitar, I never looked back.

What was your big musical break? Was there a turning point for you where music became a 'career'?

I’ve been touring since I was 17 with lots of different bands that have all had their own successes, so it’s difficult to pin point it really. I always look at music as a working career - one moment you can be on top of the world the next you can be down in the gutter, one minute I’m playing to thousands of people, the next minute I am serving drinks to people who have no idea who I am. I think to make a living you have to adapt and be able to do other things on the side that hopefully involve music … like teaching. But always enjoy the moment as you never know how long it’s going to last.

Turbowolf were a band for a long time before I joined. One of my old bands Pettybone had supported them at a show in London so I kinda knew the guys but not so well. I got an email from Andy asking if I wanted to try out and what I was up to as Pettybone had broken up by this point. So I made my merry way down to Bristol, and it all just seemed right - that was about five or six years ago now.

How does the creative process work within Turbowolf? Are there any secrets to your musical success you can divulge?

Andy and Chris do all the songwriting and messing around, Blake and I lay down the grooves. Our success is due to these few things: hot sauce, vegetables and a friendly guy called Quell.

How important is playing live to building your fanbase?

We’ve had some great support slots and slogged it out over the years. It’s about stealing other people’s fans, then getting them to come to your headline shows!”

But for me it’s all about playing live. You cannot get that feeling from anything else.

How did you find your time at ICMP and how did it help equip you for the wider industry?

I loved it, the teachers really made it for me … The bass faculty are next to none … incredible players. I was already a touring musician before I joined but I wanted to learn my chops and take myself out of my comfort zones. I got to play jazz fusion, learned how to read music and all kinds of crazy stuff.  I never thought I would be able to do any of that and it really took my playing skills to the next level. I miss my time there and I wish I had more time to pop in!

Have you any advice for new players trying to stand out from the crowd?

Just be yourself, do your thing and learn a good technique. And make sure you’re locked in with your drummer ... I really notice good technique on people. Oh and just because you play bass, try not to look so bored on stage. Nothing worse than someone not enjoying what they do (unless that’s your thing!).

Practice, I think that’s the only advise I’ve ever paid attention to… and practice pays off. And don’t be a asshole, no one likes assholes."

Who are your current favourite acts? Are there any new artists we should be aware of that you're tipping for success?

I really like a band called La Luz , there not that big in the UK however they should be. Really interesting arrangements of a garage surf rock kinda vibe, and their videos are next to none. Also my pals Idles. If you haven’t heard of them you must have been living under a rock! They are by far the UK’s best current band.

Lots of touring, Like lots. All over the world … Which means I will be sitting in a van for a good 75 percent of my time. Our new album ‘The Free Life’ comes out 9th March and we will be on the road from then ... festivals, support slots, our own tours. So make sure you come and see us! I’m also trying to find the time from in between touring to write and record my own album. So watch this space. I’ve got a lot of ideas in the pipeline that I want to get down...

Visit turbowolf.co.uk for more information. 'The Free Life' is released on 9th March. Listen to 'Domino' from the album below.

Study bass guitar in London in 2018

Are you a bass guitarist looking to push your skills and technique to the next level? Then why not join us here at ICMP London school of music. You'll be taught by top industry professionals, benefit from exclusive masterclasses from the likes of Iggy Pop bass player Ben Ellis and also enjoy unrivaled access to our facilities for personal practice and rehearsal. (Did you know our facilities are open to students until 11pm during weekdays too!)

To find out more, look through our bass guitar degree courses, part-time courses or book yourself a place at our next Open Day

by Jim Ottewill
March 6, 2018
Creators
Back to Blog Home