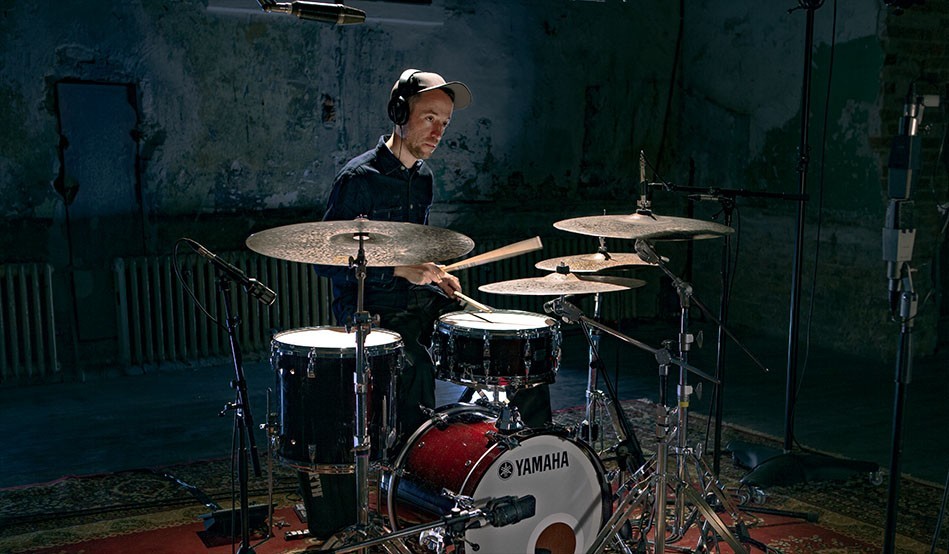 As one of London’s most in-demand drummers, we’re privileged to have Richard Spaven as a tutor here at ICMP.

Alongside his teaching, Richard is a prolific artist and musician, as well as being a top-class educator.

2019 has proven to be a big year already for Richard as he spreads word of his latest LP, the brilliant ‘Real Time’. He’s recently sold out London’s Jazz Café and will have more live outings planned for the rest of the year.

Check out our interview exploring his musical roots, love for jungle and essential advice for new drummers…

There were two big steps. One was being taken to see Buddy Rich when I was seven. The second was finding a proper drum teacher. I learned with a good jazz orchestra type of player/teacher, Freddie Wells. So from the beginning, I was technically encouraged and taught by someone with discipline.

Was there a moment when you realised that music would be all-encompassing for you?

I went into a stage of pure practice to the extent where my school work started to suffer. I remember this light-bulb moment of, “If I want to do this as my job, then I just have to knuckle down. I’ve just got to do this”.

It was an inner voice telling me. At that stage I was practising seven hours a day. Crazy amounts.

I was aware that I was pushing myself by practising so much, but it was like a transition period. I started off sounding like a good amateur and came out the other side with enough professional sound and vibe to start doing gigs."

Where did that love for jazz mesh with dance music, drum and bass and garage?

These are easy questions to answer. These are great. Yes, I remember when I got my driving licence, that meant that I could do more without my dad driving me. So, I was doing youth orchestras, and I remember turning up to those listening to really loud hip-hop. But playing-wise, I wasn’t really playing that sort of music. I was still playing a load of big band arrangements.

One of my students gave me a tape, and it was just jungle. I remember I was like, “I’ve never heard anything like this”.

That created a whole huge light-bulb moment. Then I ended up going to Speed, which was the first time I went to a drum and bass club.

I was just like, “wow, what is this?” Hearing it on a system was a total inspiration. After that, Metalheadz kicked off, Goldie’s sessions; and Sunday Sessions were like … I’m getting goosebumps thinking about it."

It was so huge for me musically.I remember on a Monday, after the Sunday Sessions, I would always feel like I would be bouncing off the walls just from feeling inspired. Like, when you go and see a great gig, and you come out and you’ve just soaked it all up.

There were a lot of the records I heard back then which continue to influence my writing and playing today.

I wanted to ask you about the latest album, 'Real Time'. Could you just talk a little bit about the record and how it came together?

Well, ‘The Self’, the previous record was a big thing, for me. It was the first time that Jordan Rakei had been on one of my records. I really felt like I had got my shit together on that record, production-wise.

I had been thinking about what to do as a follow-up, because I felt like it was going to be a tough one to follow; then this offer came about to go to Real World Studios.

Normally, I don’t make records like that, with myself and the band in the same room; it’s more of a kind of bedroom producer. I’m kind of like at home and layering.

So, having the opportunity to do that, to all be present, and work together was amazing. I wrote everything in advance, but with this knowledge that I was actually going to have to let go of it a bit more than I would usually be comfortable with. That was basically going to be the mainstay of ‘Real Time’. I like to think it went well and the response has been great. We sold out the Jazz Café the other week.

Congratulations! Is it a trio that you’ve got in place for the live gigs?

Yes, the touring band is the trio. We’re doing some sampler stuff, as well. So, we’ll do this whole hip-hop segment of all my favourite hip-hop tunes, and then MF Doom will come in rapping over ‘Meat Grinder’ out of nowhere. There are a few tips of the hat to J Dilla who was a huge influence.

But the Jazz Café was massive for me. Even my parents were there. We sold it out and I’ve never seen such an attentive audience.

We walked on stage and it just went totally quiet, like vibey quiet. We brought out Jordan which was amazing. It was just like everyone seemed to be having the best time.

What led you to teach at ICMP?

Well, one of the tutors here is Oli Rockberger, who plays on ‘Real Time’, as well. We were talking about it, and I just thought, “It might be a bit of a challenge, and a bit of an up the game”.

I’ve tried to establish a real honest learning environment with my first years that I’m teaching, and it seems to be going well. I just want them to get the most out of it that they possibly can. It was nice to have a whole load of them going down to the show the other night."

There’s always time to do extra things, and I’ve got a lot out of it so far. So, I’m even getting attached to my students. They’ll always be my first years...

What would you advise people who were starting out on their musical journeys?

Well, I suppose at this level, at the ICMP level, we’re teaching people who have already decided that this is what they want to do. So, that makes it nice to teach them because we’ve already crossed that line.

The main thing is commitment. It’s what I was saying about my little light-bulb moment when I was absolutely brutally honest with myself, realising that this is what I wanted to do, and there was no way that that was going to happen unless I put in the effort, you know. I did, and here I am.

Just keep your ears open for everything, and just stay on it. Stay focused, and get committed, and stay committed. I think that’s the main thing.

Study drums in London with ICMP

by Jim Ottewill
February 15, 2019
Creators
Back to Blog Home