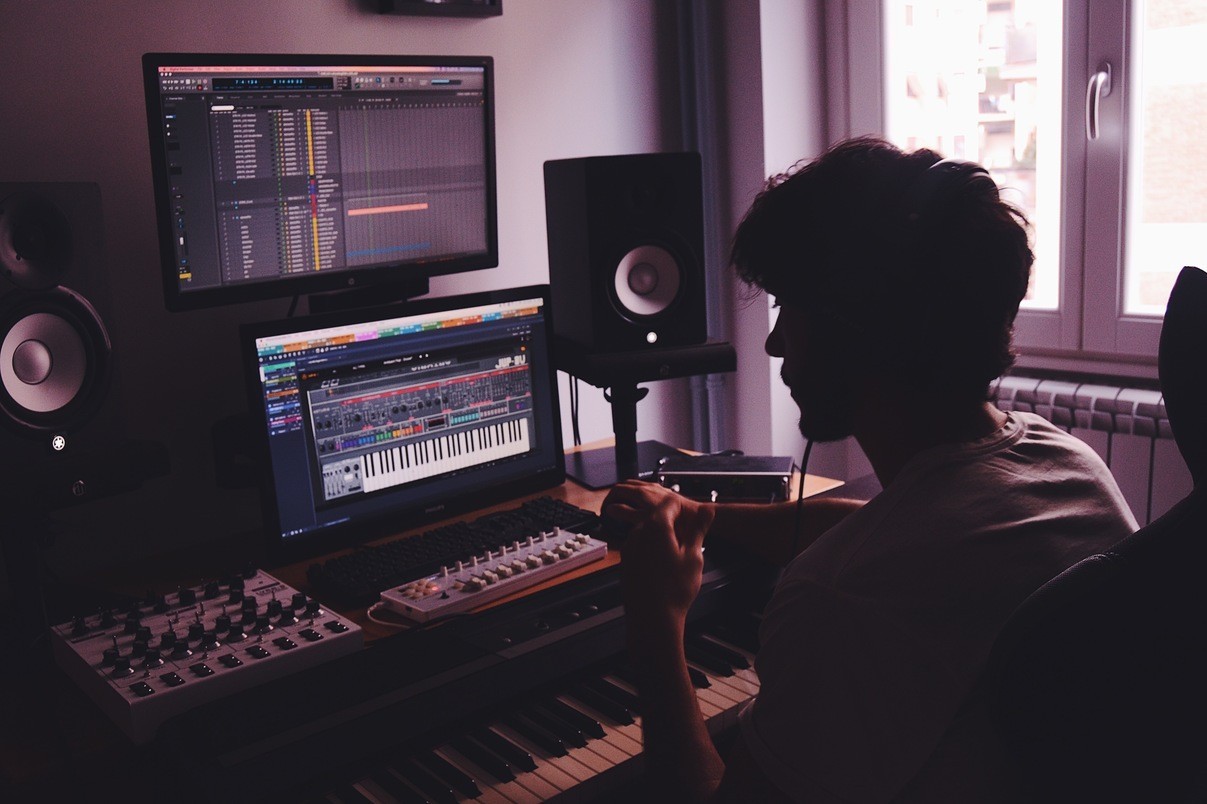 He's been behind scores for hit Netflix horror films 'The Binding' and 'In The Trap' and has been busy working on another project for release by the streaming giant.

We recently caught up with Massimiliano to find out more about his journey from our classrooms as well as advice for film music success...

I grew up in an artistic family. During festivities my family used to gather and play music together; my uncle played the guitar, my cousin the piano and my mother used to sing. I was mesmerized by their music and always wanted to join them. Plus my uncle was a songwriter. When he was young he managed to have one of his songs on the radio. When I was a kid he was someone who I really looked up to.

At what point did you know music would be an all-consuming passion? Was there a tipping point?

Right when I started to study guitar at the Scuola Popolare di Musica di Testaccio a beautiful school in the centre of Rome, a place full of positive vibes. I immediately realized music was going to be my life.

After high school, I was preparing my audition for the Jazz Conservatoire of Frosinone. Although a friend of my teacher told me about ICMP and I saw it as the right opportunity at the right time to change my future.

My time with ICMP was about more than just being at school. It was about moving to the capital of music full of inspirations, playing and listening to every kind of music genre. Meeting people from all over the world, listening to original bands, making connections."

Learning from great and successful teachers, playing in beautiful venues and festivals with my band Corners of the Earth alongside other artists. Living with flatmates coming from different countries, living on my own. It was all so exciting and very hard. This experience made me a man and a versatile musician.

What was the most important thing you learned while studying with us?

I can’t say which was the most important thing I learned at the ICMP, although I can tell you that Maurizio Malagnini and Audrey Riley, respectively teaching Composition and Arranging modules changed my life. They were such inspiring teachers and they made me find my talent for composing for the screen.

What projects have you worked on since leaving? Have there been any particular favourites or highlights?

After spending four years in London I won a scholarship for the Master's Degree on Scoring for Film, TV and Video Games at the Berklee College of Music. It was a great experience and made me the professional I am today.

After graduating I found a job as an assistant composer in Rome and scored many short films, making connections with talented young directors. In 2019 I had the chance to score the first movie of my career ‘In the Trap’ by Alessio Liguori. It is an independent movie and has been sold to more than 30 countries across the world (Russia, USA, UK, Canada, etc.). I was lucky enough to have Cinevox as music publisher of the 'In the Trap' soundtrack. Cinevox is a historical music publisher, producing artists like Morricone and Nino Rota. Working with them was such an honour. Later on I had another great chance as I won the audition for ‘Il Legame’ (‘The Binding’) by Domenico De Feudis, produced by Indigo and HT films, in collaboration with Netflix.

I worked along with the director from the start of the project to come up with a unique sound for the movie. It was such an exciting process because the film is set in Apulia, a region in the south of Italy, known for its olive trees and sunny countryside. These evocative landscapes needed unique sounds to become scary and mysterious. I worked a lot on creative sound design, reinventing the way I traditionally play instruments like the guitar, violin and tambourine, which belong to traditional Apulia music. Then I blended those sounds with the orchestra, which helped me to progressively lead the audience into the nightmare lived by the movie characters.

Have you got any advice for any aspiring film composers? What would be your top tips?

First of all, try to be unique every time you start a new musical project. You won’t regret it. It is something I always aim for and it helps me to get new opportunities. Second of all, it's important to go out and meet people (when we can), make connections, be kind and learn from others. You can’t work as a film composer if you stay in your room not meeting people, even if you are the most talented composer in the world. My third tip would be: watch as many movies as possible. It is the best way to learn.

What are the common mistakes when composers work with film?

Trying to sound like their idols. Being stubborn and too focused on their own idea.

How do you approach working on music for a score? Could you describe your process?

I usually read the script first to have a general idea. I talk to the director about the soundtrack we want to make, and I listen to their references.

What really inspires me though is watching the first edit. The colours really affect me, and I develop the sound in my head. I experiment making my own sound design and I sometimes buy instruments specifically for the soundtrack I’m going to score."

Then I start working on the main scenes, which could define the sound of the movie. Once I get the director’s approval I keep scoring the other scenes, if necessary I write themes, which can help me to be conceptually coherent during the whole process.

As a film composer, how do you promote yourself and your music?

I go to festivals to make new contacts, which is also really exciting and inspiring. Plus the directors I already worked with pass my contact details to others.

What musical projects do you have coming up?

I just finished the score to another horror movie produced by Netflix, which will come out in 2021. The soundtrack is a mix of electronic music and sound design. I can’t wait to share it with you.

Listen to the score in the trailer for'The Binding' and visit massimilianomechelli.com to find out more.

by Jim Ottewill
January 3, 2021
In the studio
Back to Blog Home