ICMP alumnus Jon Gomm tells us how his unique musical style has turned the concept of guitar playing on its head... 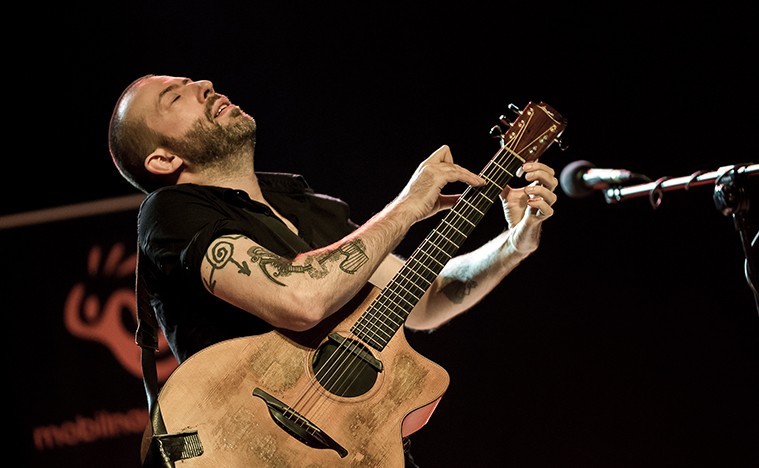 As guitarists go, there are few doing as much to revolutionise the instrument and the way it’s played as ICMP alumnus Jon Gomm.

His innovative use of fingerstyle techniques as well as rhythmic attacks on his instrument, plus heartfelt vocals make him an arresting performer who, over numerous albums, has only grown in stature  both on stage and online.

Jon’s latest work - 'The Secret Of Learning To Fly Is Forgetting To Hit The Ground' - is his latest, most jaw-dropping piece yet, a musical odyssey that is so complex, he’s launched a competition to find any other players out there who can master it. If you think you're up to the challenge, then read the interview, listen to the song and submit your entry via his website.

Ahead of a big European tour in 2018, we quizzed Jon on his musical roots, time at ICMP and how his new work is his most daring yet…

How did you begin your musical journey?
I’ve been through so many phases as a guitarist; it’s hard to find a beginning as such! One thing that really influenced me a lot was my dad taking me to gigs as a kid. You can only learn so much about being a musician from listening to records or watching videos. Being in a room with musicians, feeling the air vibrating with the sounds they’re making is so different. I used to go to gigs with my dad a lot, mostly blues gigs. So there’d be this room full of middle-aged blues fans and this one 10-year-old kid! After a while, my dad got to know all these musicians and they’d start staying over at his house after the gig to save paying for a hotel. So we’d have his house in Blackpool full of hairy American bluesmen every weekend.

You obviously take the guitar into different musical worlds far beyond standard musicianship - where did the ideas for your innovative techniques come from?
A lot of the techniques I use are very old, very traditional but fell out of favour for a long time. For example, the re-tuning thing, where I play a string and then bend it with the tuning peg, is an old banjo trick, invented by Earl Scruggs in the fifties. I just have a lot of influences, so you might hear techniques from metal - like tapping - or flamenco percussion techniques, or folk fingerstyle techniques, or jazz fingerstyle technique, or country, all in the same song.
Tapping, tunings and percussion are part of your musical armoury - how do you use these techniques to enhance your music?

To me the driving psychological impulse that makes me want to retune or use a different technique is needing to hear variety. I've always needed that, I need to make music that fires my neurons."

So I can be one guy with an acoustic guitar, but find ways of making that guitar into a different instrument for different songs, by approaching it from a different angle. Some tunes might be quite heavy and dense, with a complex tuning and a lot of effects come from the technical approach to the guitar. A deep bassline, shards of harmonics firing at you. And some tunes can be more ethereal, with a more open, spacious tuning and a wash of notes flowing over you.

How do you approach each composition?
For me, composition is a two-stage process. I almost never start with the guitar, and when I do often what comes out is an instrumental, perhaps something leaning a little heavily on technique. So I start with the song. Specifically I start with the reason for the song. Why am I writing? What do I need to express? And then I find a way into that, metaphorically. All music and lyrics are metaphor to some degree. Then I start thinking about melodies, rhythms, feel and sound, I sometimes think in terms of musical genres, then actual parts like bass, maybe drums, maybe guitar. Then, and only then, do I actually start to arrange for guitar. And I let myself get as crazy as I want with the technique. Whatever the song needs, I can add. I don't care if it gets "too technical", I don't think that means anything. This two-stage process is absolutely important to me, because it means I have a song written purely for the song, never for the technique.

It matters to me as an artist than when I play a song live, it means something deeply important to me. Otherwise, what's the point?"

'The Secret Of Learning To Fly Is Forgetting To Hit The Ground' is your latest piece of extraordinary music - could you explain the thinking behind it?
Yeah so I wrote this on the guitar. Ha ha! After everything I just said. It's a pointless artefact, I was just experimenting to see what I could do, and before I knew it I'd written a whole piece, and I was wondering why. The solo in the middle, was purely me wondering if I could do a thing. It's a funk bass/percussive groove in the left hand, and a full legato fusion solo played using "eight finger tapping" in the right hand. It's an absolute beast to play. The hardest thing I've ever attempted. So for me, for the release, it was a very natural idea to turn it into a guitar competition, and yeah a few entries came in within 24 hours! Those guys must have stayed up all night. I haven't watched them yet, though, I'm gonna wait a little longer so I know somebody's probably nailed it or close enough.

Who are your musical heroes?
That question is an interview in itself, but I'll tell you some just for you. When I came down to ICMP, I was 18, I was about to get to live inside the musical minds of loads of my heroes, the guitar geniuses from the magazines, and I worshipped them. Shaun Baxter, Lee Hodgson, Iain Scott, Dave Kilminster, Max Milligan, Terry Gregory - these guys are such masters of their craft.

I was asked by a magazine once what my proudest musical moment was. And it wasn't even one of my own achievements, it was the night I saw Dave Kilminster, my hero and former teacher, standing atop the huge wall inside an arena in front of 90,000 people, and launching into the 'Comfortably Numb' solo.

How important was your time here at ICMP and how has it shaped you and your music?
It was vital. I learned so much of the theory and technique I still apply, from so many genres. I had some on stage triumphs and some on stage disasters, and it taught me that live music isn't a perfect form, you can't nail it every time. But you can try, and you can push past your own nerves or insecurities, and in doing so you can learn that you have one unique thing to offer, and that's yourself.

Could you explain a little about the gear you use - what's your musical set up?
So I have a new setup. It's gonna sound complex, though, I fear! I have my Lowden signature model guitar, strung with my Newtone signature strings which are specially designed for low tuning. Then I have two pickups comprising three "sources" in total: A Fishman Rare Earth Mic Blend, which has a magnetic (humbucker) pickup and a little condenser mic, and a Fishman BP100 pickup which is a transducer, stuck to the soundboard inside the guitar. I run the magnetic pickup through some effects sometimes, like a Boss OC3 octaver, and a Zoom BT100 which is a little multiFX box with overdrives and some crazy ambient effects. Then all that gets mixed together inside a Motu Ultralite AVB which is basically a little digital mixer, then the output from that goes into a TC Helicon Voicelive, as does my vocal. In there I add the reverb and delay to the guitar and vocal. Then from there it goes to the PA.

What's the best piece of musical advice you've received?
Tune down. Some biker guy in a pub who claimed he used to roadie for Sabbath or someone, totally mansplained to me about how my guitar sound had quite a lot of treble and my voice sounded like it was reaching a little too high. And I should tune my guitar lower. And I was like: "Wow, this pretty annoying guy is, by genius or coincidence, totally frickin right!" That was about 2006.

What does the future have in store for you?
Who knows...

Study guitar in London in 2018

Are you a guitarist looking to push your skills and technique to the next level?

Then why not join us here at ICMP London school of music. To find out more, look through our guitar degree courses or book yourself a place at our next Open Day

by Jim Ottewill
December 5, 2017
Creators
Back to Blog Home