Future soul sensation Iyamah tells us how she's landed at the top of 'ones to watch' lists in 2018... 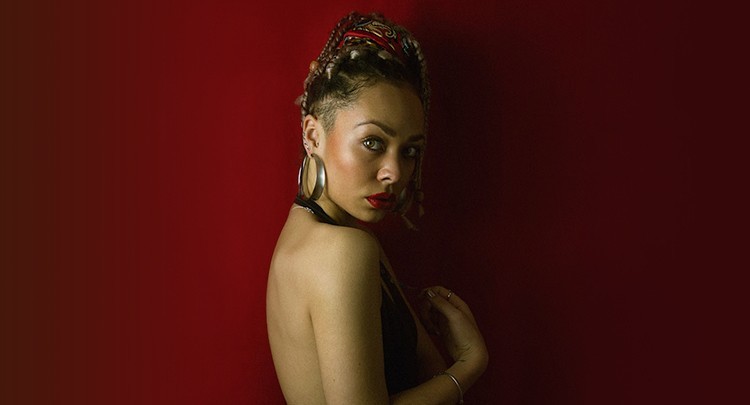 ICMP songwriting student Iyamah has ensured she is at the top of new talent lists with the recent release of her classy debut single, 'Cryptic Love'.

Her future soul sound has picked up plenty of acclaim so far in 2018, seeing her music bigged up by Dummy Mag as well as support slots with Mahalia and Sam Wills. With more new music expected in 2018, we caught up with Iyamah to learn more about her artistic roots and how her studies at ICMP have helped elevate her songwriting styles...

How did you first start your musical journey? Was there a person or record who helped start you off on your journey?

My childhood was very creative. In Brighton I was surrounded by music, art and culture so that inspired me a lot growing up. My mum was a painter and all her close friends were either artists too or in the fashion industry, some were musical and her best friend was a dancer - so I was lucky to be around people who encouraged me to do what I loved. I remember there always music playing at home and we’d go to festivals during the summer.

At what point did you know you were on to something with your music?

It was probably during college around 16 when I started writing top lines for drum and bass/house tracks. I had put some of my original songs on Soundcloud and then unknown producers/DJs started sending me beats to write over. One day I was approached by an independent drum and bass label called ShoGun Audio who I built a relationship with over time. They would give me advice and feedback on my writing until eventually they sent me a track by My Nu Leng to top line. This was a huge deal for me at the time because me and my friends were fans of theirs and had seen them live loads. It gave me the confidence to be able to write over anything.

What's been the best piece of advice you've received regarding your music industry career to date?

Nothing that’s worth it is easy. If you wanna live your dream, you better worrrrrrk!!!

Success is 99 percent failure, so when it gets hard, that's when you've got to keep going. I’ve been let down many times, but that just made me realise how much I wanted it."

You're a songwriting student at ICMP - how has your time studying with us helped you progress your career?

It’s a great platform to start. At 19 when I moved to London I didn’t know anyone, so it was cool to have a community of like-minded people who were all in the same position as me. I was able to learn about myself and build my confidence having a safety net around me where I could ask questions and not feel judged or alone. London is a big place and everyone's chasing the same thing, so it’s good to have people you can trust. Uni is also a good way to keep track of your progress and see how you’ve developed over the years. I know for a fact my songwriting has improved massively since first year.

What would you advise aspiring artists and songwriters?

Don’t compare yourself to others. Everyone's path is different so it’s important to remember who you are. It’s easy to lose yourself in the industry but you must be patient and allow yourself to grow to your full potential. Don’t let someone else’s opinion shape your vision.

You just released your debut single 'Cryptic Love' - could you explain a little about the track and how it came about/the inspiration behind it?

'Cryptic Love' is about protecting yourself as a young woman. I was raised by a single mother so I’m always for empowering females - but I guess this song is a representation of how being hurt one too many times can make it difficult to trust in relationships. It’s kind of like me holding my hands up and admitting to the fact that I’ve been vulnerable,and that’s okay. The times I’ve been hurt by others is when I've learnt how important it is to love yourself.

How can new artists stand out in 2018? Are there any things they need to do to increase their chances of making an impact?

Take up any opportunity that comes your way, don’t waste no time! Tell yourself you can do anything and go chase your dreams. You deserve it. Go get it!!!"

What does the future have in store for you music wise?

I’ll be releasing more songs throughout the year, so keep an eye out.  I’m performing at Boomtown and hopefully a couple of other festivals this summer which should be fun. I’ll also be returning to my hometown Brighton for The Great Escape Festival in May for the UMA’s award ceremony, so I’m hoping the sun comes out in time this year!

Listen to 'Cryptic Love'  and find out more about Iyamah via her SoundCloud profile.