ICMP alumnus and Gutterdamerung guitar shredder Chris Jones traces his journey from our classroom to opening arenas for Iron Maiden... 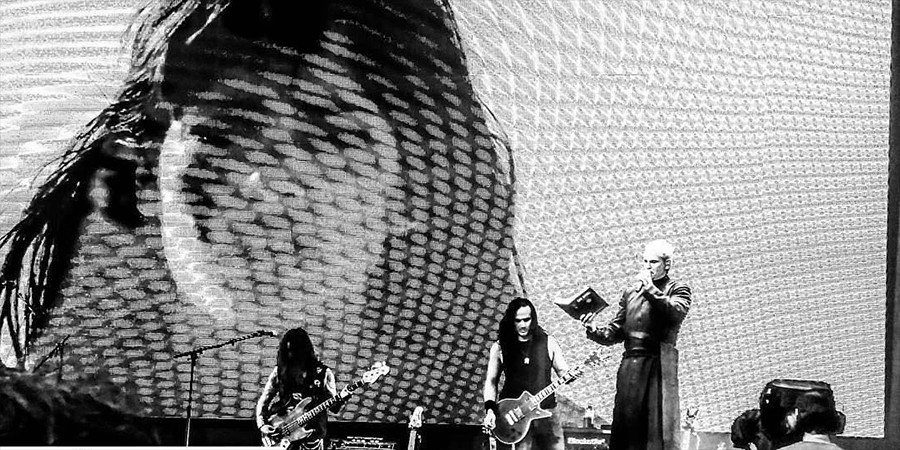 Playing guitar is a lifelong passion for many and our alumnus Chris Jones is no exception.

Starting off as a teenager player, Chris enjoyed a stint studying with us back when we were known as The Guitar Institute. Since then, he's gone on to enjoy a great career, playing some of the world's biggest stages with Voodoo Six and Gutterdamerung (alongside our recent masterclass guest Ben Ellis).

When Chris isn't on the stage, he's a much in demand guitar teacher, giving new players and musicians plenty of advice on how to improve their playing and launch their music industry careers. With this in mind, we quizzed Chris on his life in music to trace his musical exploits and find out more on what it's like to play to huge stadium-sized crowds...

When I first started playing guitar, my dad was able to show me some basic stuff. He grew up listening to the Shadows so I got a taste for lead playing through him.

Later I got into metal bands like Metallica, Megadeth and Pantera. That evolved into ever more complicated and technical music like Dream Theater, Steve Vai and Joe Satriani.

What led you to the guitar?

Funnily enough, my brother broke his arm on his birthday and his gift that year was an acoustic guitar. He never really got into it once his arm healed so at about age 11, I dug it out and have never put it down since!

I think the guitar was like this puzzle I had to solve, and each new band I listened to was like a discovery of what I wanted to be able to make it sound like."

I grew up in a time when you had guys like Tom Morello, Jim Martin and John Frusciante making music that fused different styles, then all the eighties shredders and metal guys - when you first hear guys like Dimebag Darrel at that age and in a time when that stuff was totally new, it gave me a buzz to try to recreate that.

Could you explain a little about your time at ICMP - when were you here and how did your experiences help prepare you for the industry?

After getting a BSc at university, I started playing more and more guitar and decided I would invest in a course to give me a grounding in my guitar playing. That was back when the course was run from Stanley Gardens at The Guitar Institute around 2001-2002. I chose not to continue at degree level, but to get stuck in to guitar teaching as I needed to earn some money!

The course definitely gave me a kick up the backside - I realised how rubbish I was at reading and notating, improvising and being versatile in contemporary styles. After the course I spent a lot of time practising to build on those blind spots."

As a guitar teacher, it was really helpful to join up the bits of theory I’d taught myself previously. I’ve been able to build a good peripatetic and private teaching business ever since.

You were a member of Voodoo Six, playing with the likes of Iron Maiden - how did you find these experiences?

We played with some great acts as a support band - UFO, Adrenaline Mob, Winery Dogs, Extreme - I got to meet heroes like Vinnie Moore, Mike Portnoy, Nuno Bettencourt, Ritchie Kotzen. Maiden was the ultimate - I’m a HUGE Maiden fan and the whole memory of opening for them is just a little surreal! We toured for two months, playing arenas, stadiums and major festivals. It was incredible! I also felt that by that point I had reached a level of confidence in my playing ability and performance that meant I got a chance to show what I could do at the top level of touring.

Ultimately I lost heart in playing for Voodoo Six. It never earned me money and so it actually caused a lot of stress financially to be a part of. I also felt, because of my teaching schedule, I couldn’t motivate myself to be a creative part of the band. I decided that at some point I would have to put a price on my skill and stick to that principle. Being in music can be up and down in terms of the experiences - it goes from exhilaration and disbelief at what you are doing to doubts about whether or not you can sustain it all! (of course we guitarists know sustain is everything!)

Amazingly two years after playing stadiums opening for Maiden I found my self in Gutterdammerung, playing alongside Iggy Pop's band, and guys like Jamie Humphreys, with a fantastic singer called Jesse Smith in front of 20,000 in Rockavaria, Muinch. Everything happens for a reason!"

Could you talk a little about the Gutterdammerung project - how did you get the gig and what have you learned from being part of it?

I got a call in 2015 when I was pretty down about the music industry. I toured and performed everywhere in Voodoo Six and my Pantera tribute, but financial success was not really a part of that and my main income source was teaching. So I decided to make a break from my band and stick my neck out for other projects specifically only for paid work. It actually fell into my lap shortly after quitting Voodoo Six when a guy called Kevin Armstrong, who plays for Iggy Pop, gave me a call through a recommendation from ICMP tutor Martin Goulding.

He wanted to know if I could play in front of huge crowds, did I have equipment - he pretty much trusted my recommendation as I didn’t so much as audition as join up and rehearse straight off the bat.

What is Gutterdammerung all about?

Gutterdammerung is a crazy project involving multiple rock star cameos in a film/rock show hybrid. We have toured with Henry Rollins through Europe, and have performed with The Eagles of Death Metal (the night before the horrific Paris attack), Grace Jones, Allan Johannes. The idea is we play underscore to the film - my specific role is to bolster the metal and shred areas of the set but I also need to fit in with the punkier and more classic rock aspects of the show. We have an opera singer who is incredible, and we all perform in a unique way in which we are visible through the cinema screen but perform out front at certain points - I get a big shred solo spotlight. It’s great fun and very professionally handled by the production team and crew. It’s a show that works touring as a band and also as a show in residence.

Mostly I’ve learned a lot about being prepared for a professional tour, going through a pre-production rehearsal process and playing to cue. I’ve also had the chance to play the broadest range of styles in one gig and to make sure I’m capable of getting the sounds Kevin requires of me.

What current projects are keeping you busy?

As a family man, I’m focused on keeping a full teaching schedule. I occasionally get out with my Pantera tribute, and then wait to be called up for duty in Gutterdamerung. If another session job came in I’d take that up too.

I’ve never really addressed the whole home production thing, so I’m experimenting with a Logic Pro setup and Final Cut, hopefully to start a video based tuition project via Youtube, and slowly work towards getting creative again on my own terms.

I’d love to get involved in teaching at a higher level following more in the footsteps of Martin Goulding, including magazine and web zine assignments. I may be doing some work for Lick Library at some point.

What would be your top piece of advice to any new players on how to get ahead in the industry?

You really have to stick to your guns and make sure you are always doing something related to music - for me this was teaching guitar. It allowed me enough financial security to experiment with the whole touring in a band thing and build up the confidence and professionalism to step up into the live session world.

I guess being diverse in your playing is important - I’m mainly a rock and metal guy so I didn’t drift towards covers or function work, but it’s an income source guitarists should consider.

I never imagined as a student that I’d ever be playing in front of 65,000 in Sweden's national stadium, opening for my favourite band Iron Maiden, but, somehow, it happened. It goes to show you should not give up dreaming."

I’m not a rich rock star, but I have made a living with my guitar in my hand and also met my lovely wife and that is satisfying to me. As my trajectory shows, you simply can’t predict where you are headed but you must believe in yourself and keep working hard.

Are you a guitar player looking to take your career to the next level?

Then why not join us here at ICMP London school of music. Look through our guitar degree courses and book yourself a place at our next open day

by Jim Ottewill
March 14, 2018
Creators
Back to Blog Home