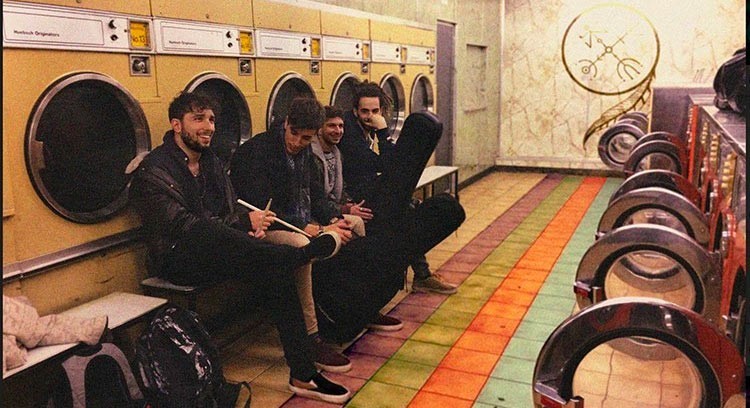 Keemosabe, an experimental band of funk rockers, have a truly international music background.

Originally formed in New York, the group have spent time in Italy and in London with Sebastiano Vecchio and Alberto Curtis both studying on our Masters in Music Performance before heading back to their native Milan to work on their debut album.

Having recorded at Abbey Road Studios via a successful Kickstarter campaign, the group balance an exploratory, experimental sound with an entrepreneurial flare and a work ethic suggesting they're going places.

Check out their debut single 'All Is One' and read our interview on their already exciting career to date...

How did you Keemosabe get together? What was the thinking behind the band?

The project was born in New York City. Alberto Curtis and Sebastiano Vecchio, while studying jazz at The Collective, started working out on some ideas that would bring together the more experimental musical world that they were getting to know in Manhattan, and their musical roots in rock, funk and blues.

They moved back to Italy and built their own home studio in the woods of North Italy. There, they met Andrea Guarinoni and Pino Muscatelli and the band was officially created.

Musically, it really represented the path of moving away from a big city to reconnect with nature.

Exploring our inner universe is something that is getting lost in modern society - we want our music to guide the listener through a new search of the self across musical genres."

Who do you look to for musical inspiration and influence? Are there any particular artists?

Like I said, for us it's mainly about looking inside ourselves. Letting our emotions flow, and bringing them out to the world to share them with the people we love. Regarding our influences, we are trying to pay homage to the greatest, Beatles, Doors, Zeppelin etc, but we also deeply love to explore different worlds and bring them together in our own way. Our more recent influences are artists of widely different styles: Foals, Snarky Puppy, Queens of the Stone Age, John Mayer.

You ran a successful Kickstarter campaign last year - can you explain a little about this, what inspired it and how you did it? Have you got any advice for artists looking to do the same?

During last summer we found ourselves stuck. We needed to record an EP and buy new live gear but we couldn't cover all the expenses. One of the positive sides of modern society is that there are web platforms that can bring together people from every corner of the globe. So we decided to use Kickstarter and set a goal for our crowdfunding campaign. We reached it in the record time of 15 days, receiving donations from all around the world.

I'm not gonna lie, it wasn't an easy ride. We spent a whole month preparing it logistically, then weeks sending out emails and messages to all the people we knew, preparing videos and pictures for promotion on social media, plus live concerts to promote it.

The only simple advice that we could give to other artists is: show your fans how much you're passionate about it. Let them know what you're striving for, let them feel that you don't sleep at night to realise your dreams."

They will acknowledge it and be ready to help you if they feel you're actually putting your heart into this.

You've also enjoyed time recording at Abbey Road? How did you find it?

Abbey Road was a life changing experience. Entering those studios and realising that all your heroes created their masterpieces in those very rooms, gives you the chills.

Apart from the legend behind it, Abbey Road is still one of the best examples of quality and professionalism when it comes to recording music. We were also lucky enough to perform live in the legendary Studio 1, and we are extremely thankful for this opportunity.

Sebastiano Vecchio and Alberto Curtis are both ICMP alumni - could you explain a little about your time at ICMP - what did you learn here that has helped you progress in the wider industry?

We just graduated from the MMus course. It has been a wonderful year. Mainly because ICMP is a meeting point of awesome musicians, and you can create collaborations and relationships that can last forever. On the industry side of things, ICMP is a useful place to go to, as it gives you direct contact with people in the music industry that would be really hard to reach if you weren't a student!"

But it's also a really big school, so I would say that the best thing to do is to arrive there with a "plan" when you start studying, to avoid getting lost in your own choices and be fully prepared when chances come.

Have you a favourite piece of music gear?

We do love vintage gear, from old tube amps to vintage mics and drum kits. We are constantly daydreaming about being able to bring Hammond organs and Mood Modular synths on tour with us.

What's keeping you busy? And what does the future have in store for the band?

We're back in Italy to record our first album so that's now the main concern. We are also promoting our singles recorded at Abbey Road, we recently had a big release party in Milan that went very well and we are trying to fit mini tours in alongside the recording sessions. We are keeping ourselves as busy as possible and we'll be in London again very soon!

What's the best piece of advice you've received about the music industry - and have you any advice for new bands and musicians?

The best advice that we received multiple times from famous producers, managers etc. is to play and write music that comes from our heart, that we really feel deep inside."

The easier choice is often around the corner, but you should always make choices that will bring happiness to your life as a person and an artist, not something that can give you a brief moment of fame and fortune.

Hopefully these choices will bring us to a more fulfilling career in the long term!

Listen to their debut single 'All Is One'.

Study a Masters in Music Performance in London

Are you a musician looking to take your instrumental technique, musicianship and performance skills to the next level? Then the MMus in Popular Music Performance with us here at ICMP could be for you. The course combines advanced performance skills, musicianship expertise, instrumental technique and songwriting talents with innovative academic theory, research, critical reasoning and analysis. Any questions? Then our Admissions Team are on hand to help you - contact them by calling 020 7328 0222 or emailing enquiries@icmp.ac.uk.

by Jim Ottewill
March 15, 2018
Creators
Back to Blog Home