We catch up with our alumnus to find out more about his career as a top session musician... 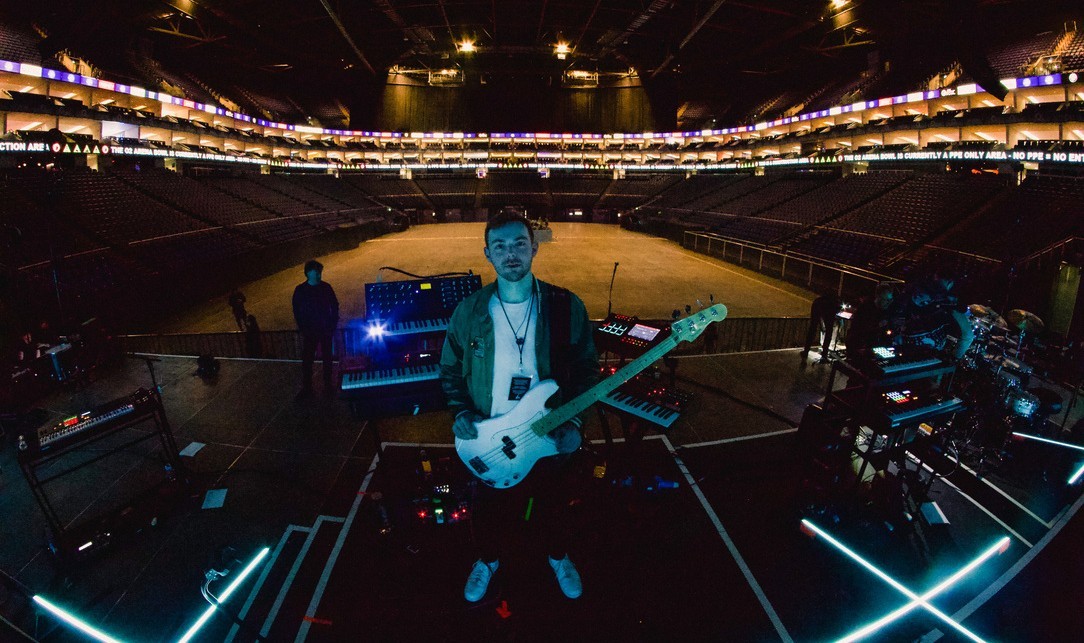 The Jubilee celebrations have been one of the biggest events of the year and we were delighted to see ICMP alumnus Digby Lovatt involved.

A former student on our BMus in Popular Music Performance, Digby is a renowned session musician and graced with the stage with Eurovision sensation, Sam Ryder.

Here we catch up with Digby to find out more about his experiences with Sam and time with us at ICMP...

Could you talk a little about how you started your musical journey?

I grew up in a household with constant music.

My dad is a dancer and my mum would often sing in local choirs. My dad would always play records by Pat Metheny, Al Jarreau, and pretty much anything from a musical. Having so much exciting music playing around the house definitely ignited my interest before I started learning an instrument.

You're a multi-instrumentalist - do you have a particular favourite instrument?

I’d say that my joint favourites would be the bass guitar and synthesisers.

My favourite bass would be my five-string Sadowsky, and my favourite synth would be a Moog Voyager, which I have been lucky enough to use on a handful of gigs."

Who your greatest inspirations were when you were starting out?

Victor Wooten and Snarky Puppy were huge inspirations when I was a teenager.

But I was also very lucky to have some amazing tutors (Nick Gray, and Charlie Thornton) before going to music college, which pushed and inspired me with every lesson. Bill Evans, Marvin Sapp, and the Funky Knuckles were also big musical influences.

What led you to ICMP? And how did you find your time studying with us?

My bass teacher at the time, Charlie Thornton, told me about ICMP as he was a student there. He encouraged me to apply for the bass scholarship for the Higher Diploma course which I was later awarded!

The Higher Diploma course in particular was an extremely educational year for me as I feel it really set me up to work as a professional musician in the London scene. Continuing on the BMus, the course allowed me time to actively work on my instrument, whilst starting to work on the first steps in my career.

What's the most important thing you learned while studying at ICMP?

The importance of networking and building relationships, whilst progressing and developing your craft as a musician.

Could you talk about how you found your way in the industry after you left? What initial steps did you take?

I started actively gigging around London whilst studying at ICMP.

My goal was to have enough work as a musician by the time I graduated to sustain myself fully. I started by saying yes to every gig I was offered, and I would upload loads of videos to social media. After a conversation with James Brister in the Careers and Industry Hub, he encouraged me to upload covers to YouTube, and to create a website.

One of these videos landed me on my first paid artist gig with Talk Talk keyboardist Simon Brenner in his new band Angel River. I met an artist called James Vickery at this gig and joined his band, this in turn introduced me to a bunch of other artists and musical directors which ended up being the foundation of my career as a session musician.

Congrats on the big Jubilee gig at the weekend - how did this come about? And how was it working with Sam Ryder?

Thank you! This was my second gig with Sam, who is by far one of the friendliest people in the industry!

I first worked with him playing keys at the London Eurovision Party. I got the gig after meeting his musical director on another artist project. I was then asked to play keys for him at the Party at the Palace concert! It wasn’t until the dress rehearsal that the production manager wanted to even out the look of the stage with a bass player, they were struggling to find a bass player last minute so they hired another keys player and I jumped on bass!

Sam is an absolute pro, and a pleasure to work with! The same goes for the rest of the band/crew!

You've worked with a number of other artists such as Jack Garrett and APRE - could you talk a little about this - how did you land these big gigs?

Pretty much every project I’ve worked on I was put forward by other people already/previously involved.

It all comes down to networking, and being 100% prepared when you walk into rehearsal on day one."

A good example of this was with one of my first artist gigs with the legendary Kelis. I was asked to play bass for her five days before a festival in Hungary. All they gave me to prepare was an mp3 of an hour long medley of 34 songs … there was also no rehearsal before the gig. Having so much to learn in a short period of time taught me a lot about effective practice, which has been a priceless asset in my career so far. I’ve had a couple of auditions where they asked me to learn a song the night before, at first I thought this was poor management, but I later realised it was a test to see how well you can learn a song, whilst also testing your musical intuition with limited time.

Working with Jack Garratt is definitely a challenge - musically speaking, he is a wonderful person, and a joy to work with!

Jack himself is a multi-instrumentalist, and plays pretty much everything you hear on his records. When it comes to his live shows the set up consists of; Jack playing guitar, bass, a bit of keys, and obviously singing. Toby Partridge on drums and electronic percussion. And myself playing several synthesisers, MPC, live percussion, and bass.

I had to learn all of the parts for all of those instruments prior to rehearsal, and then using musical intuition along with Jack to arrange parts. It resulted with a very exciting and dynamic live show, and is a gig I look forward to every time new dates get sent my way! I got the gig from a multi-instrumentalist friend of mine Geo Jordan after he became busy with another project. Geo is one of the most incredible musicians - on every instrument - that I’ve ever seen and worked with.

Have you any advice or tips for anyone looking to succeed in the industry?

Professionalism, and a smile goes a long way! Don’t be afraid to put yourself out there, and try to take every opportunity that comes your way.

Don’t dwell too much on making mistakes, we all make them. Learning how to recover from a mistake on a gig without letting it phase you is a key skill."

What future projects do you have in store?

There are a couple of exciting projects in the pipeline … but everything can change in a heartbeat with this industry, so I tend not to talk too much about them until they are happening. Feel free to follow my Instagram to see the latest though.

Watch Digby perform with Sam Ryder at the Jubilee celebrations below.