Home » Blog Articles » Interview with Ben Earle from The Shires

Interview with Ben Earle from The Shires

We quizzed Ben Earle from The Shires at our Songwriters' Circle about his top songwriting advice... 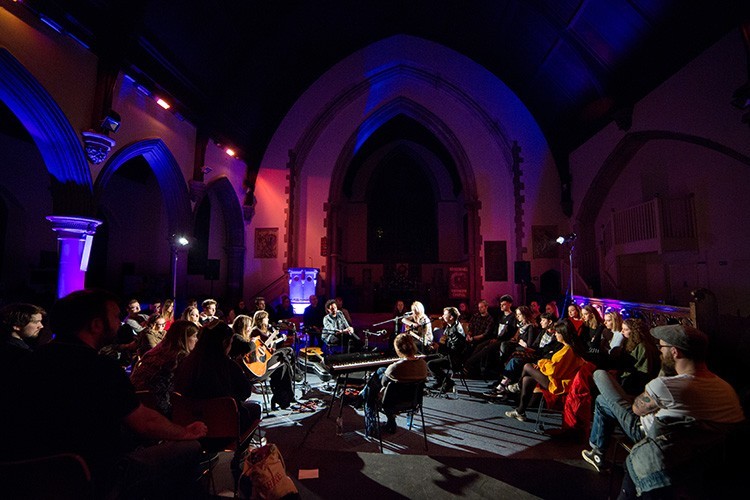 We were lucky enough to welcome the brilliant Ben Earle from UK country sensations The Shires to our March Songwriters' Circle.

Ben is one half of the duo who have smashed chart records since they set out on their musical journey. The pair first entered the history books in 2015, when their debut album ‘Brave’ became the first ever British country album to enter the UK Top Ten. The follow up - 'My Universe’  - also broke new ground by becoming the fastest-selling British country album of all time and reached the top three in the UK chart.

With their latest album 'Accidentally on Purpose' due for release this week, we were able to catch Ben for a few moments when he appeared at our Songwriters' Circle event to find out more about the new record, his love for Nashville and top songwriting advice...

What projects have been keeping you busy?

We’ve been really busy. I’ve got a baby on the way which is keeping things pretty hectic, plus we're releasing our new album at the same time. The baby is due on 19th April and the new album is due for release on 20th April so it's shaping up to be a crazy time.

We’ve been to Nashville, and made half the album before Christmas, then the other half after. We did it a different way to previous records - it's a bit more pop with us playing pretty much everything ourselves with one producer. We've also recently been to LA and shot the video for the latest single 'Guilty'. It’s a bit more colourful with us dancing around so a bit of a progression.

It was great fun to do and seems that people are listening to it since the release which is also good. It’s always a bit nerve wracking when gearing up to let new music lose but people seem to be into it. With this and the baby ... well I’m not stressed, just excited!

What is the appeal of playing an event like Songwriters' Circle?

Songwriters' Circle is great as the audience get to hear songs as they were initially conceived. Often you hear these big productions and you forget about the song itself behind it so it’s really exciting to hear them in this setting."

Being up close and personal is so good for aspiring songwriters. I’ve played the Bluebird in Nashville and attended similar gigs at a few tiny venues and being that close to someone is unreal. We’re big friends with this country artist Kit Moore. It’s such a privilege being inches from someone like him hearing him sing. It’s also fantastic that these Songwriters' Circles are becoming more prominent in the UK. I think it’ll be so good for students to get inspired by the event tonight.

Have you any advice for new songwriters?

The advice I give to anyone starting out is to keep writing. It sounds cliched but I know writers who have written smash hits that have taken over the charts and they write so, so, so many songs. And only one or two will make it."

In Nashville people are often writing 200 songs a year - maybe one or two will emerge or be heard by other people. So you need to keep writing and keep writing.

I firmly believe it’s better to finish something rather than perfect something. I went through that process of trying to perfect and never finishing. The only way to learn is to do it, write and try and complete: there are obviously certain techniques to writing songs but I believe you really discover your style through doing.

There’s a lot said about writing a song a day in Nashville. Is this a rule you adhere to?

Yes I do but a song a day is tough to stick to when on tour or at home. At the same time, songwriting is definitely a muscle and when I haven’t written for a while, I’m rusty. When I go to Nashville and haven’t written for a month or so, it takes me a couple of sessions to get into it. Sometimes you’ll have times when it’s hard to write. That’s okay, if it’s not coming, that’s cool, go and do something else. You need to be relaxed so try not to worry too much about it. I always find my best songs come from when I'm not fretting or stressed.

As country artists, Nashville is an important place - why is it such a magical place?

You have so many people coming from all over the world now heading there - it’s a big melting pot of people and styles.  Everyone who gravitates to it, they bring this energy from all the different places they come from. You can hear that in the music.

There’s a real work ethic behind writing songs too. People live to write - when we’re there, people will say let’s meet up and write tomorrow – and people actually do it. As a writer, I’ve learned so much about how to be a songwriter and developed so much there. It’s an amazing place.

Our next Songwriters' Circle event takes place on 23rd April at the Rosslyn Hill Chapel in Hampstead with Elena Tonra from Daughter. Find out more.

Watch the video to 'Guilty' below and visit The Shires' website to find out more about their new album and tour.

by Jim Ottewill
April 18, 2018
Creators
Back to Blog Home