We learn more about our alumnus' achievements performing as Freddie Mercury and with Spanish legends Los Bravos... 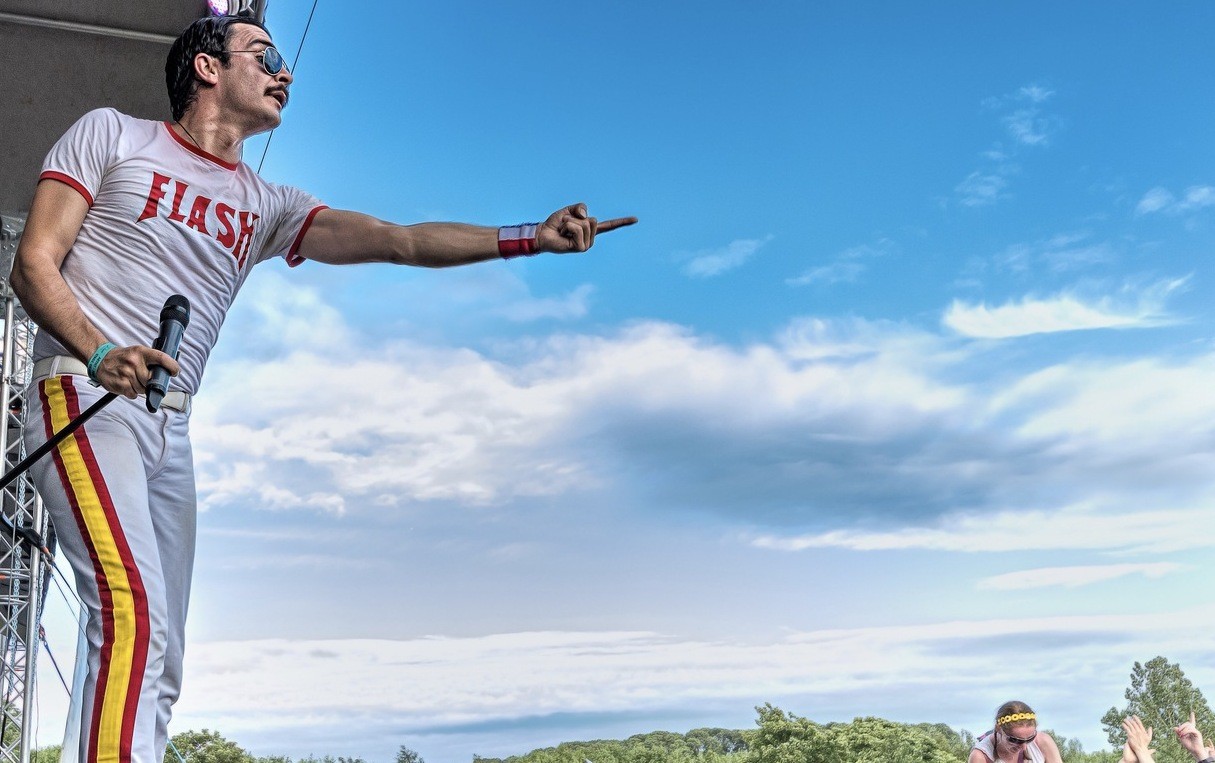 Singer, songwriter, researcher, gear expert: few have been as big a part of ICMP as Behrouz Ghaemi.

Behrouz has been with us for the best part of 15 years, first as a student on the Higher Diploma before taking up undergraduate and postgraduate studies. He's since worked in the facilities department while also enjoying a great career as revered Freddie Mercury tribute act Bruce Game. He's since been working and writing with the legendary Spanish band Los Bravos, an iconic sixties band loved by film director Quentin Tarantino. The latter adores them so much, he included their music in his latest film, 'Once Upon a Time in Hollywood'.

We caught up with Behrouz to learn more about his vivid musical journey...

I began singing at the age of four as a result of watching variety of video cassettes from Bollywood to Michael Jackson’s 'Thriller'.

I was born in Iran, and back then our country was at war with Iraq. It meant our family had to stay home in the basement a few hours per day to stay safe from regular air attacks.

During these, I took the chance to entertain my family by dancing and singing to cheer them up and soon I realised I thoroughly enjoyed being the centre of attention. A few years later my parents bought me my first keyboard and I started to learn playing songs. But the real breakthrough happened when one of my dad’s friends showed up to our house party and brought his guitar with him. He absolutely blew me away by his musical virtuosity and his great voice. I desperately asked him to teach me how to play guitar and sing and he kindly accepted. That was the first serious step I took towards learning music properly. 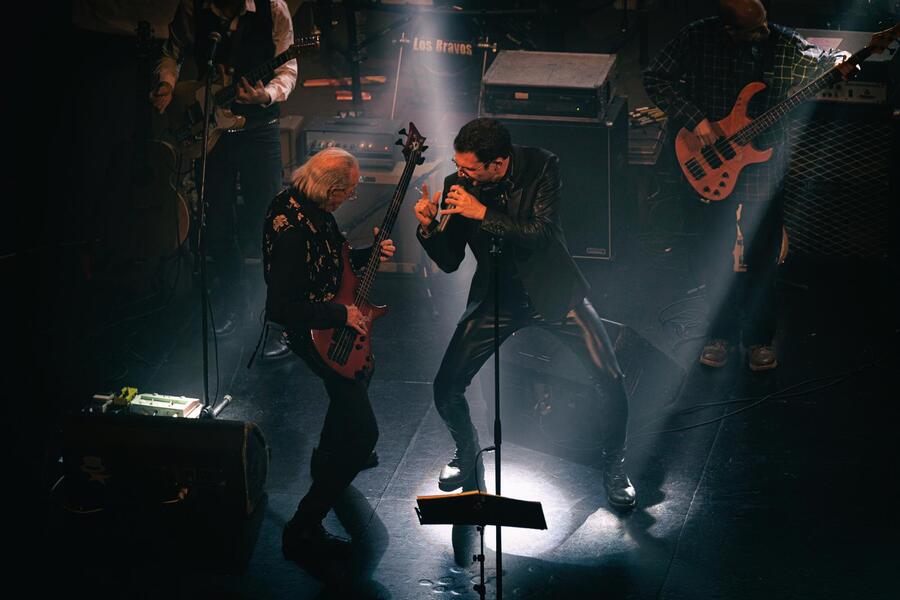 What led you to London and ICMP?

After studying classical music in the Ukraine, I knew I also wanted to explore contemporary music. Being a huge fan of British bands such as Pink Floyd, Queen and Led Zeppelin, there was only one place for me to go, London. I searched for music colleges, did an audition for ICMP and I got accepted on the Higher Diploma course. That’s how my journey began.

How important was your time with us? I've learned you've studied across a range of courses?

I have had the privilege of being part of the ICMP student community as well as the ICMP staff for nearly 15 years now.

I have studied the diploma, a bachelors degree and MMus in Music Performance as well as being an active member of the Facilities team.

I've managed to develop my instrumental skills by hanging out with amazing players from all over the world I have met at the college as well as always keeping an eye on production classes and Songwriters' Circle events. The opportunities are endless at the ICMP.

Through ICMP masterclasses I have met and worked with Whitesnake, Jamiroquai, the Amy Winehouse Band, Guthrie Govan, Mike Portnoy from Dream Theatre and many more. ICMP is like a big family and I've felt very welcome since day one."

I remember James Brister gave me my first induction to the college and I was wondering if he knew me already as his approach was so friendly. Soon I realised this was the same with every other member of staff from the CEO to academic support team. The tutors are very carefully selected from the best musicians you could possibly come across.

The amount of knowledge conveyed from teachers to students is immeasurable. No matter what level of musicianship, there are always new skills to be learned from ICMP's world class tutors. Being at ICMP is like a one-stop shop for music.

What's been the best of advice you received about music while at ICMP?

I guess the Live Performance Workshops (LPW) were really the places to get real advice from tutors.

You get a direct feedback about your performance in front of your peers and nothing could be more stressful and yet still exciting at the same time. It really prepares you for the real world. Basically after performing in a LPW you become invincible. But If I want to point out at one piece of advice I always try to remember, this would be “breathing”. No matter what instrument you play, breathing properly will make a huge difference. 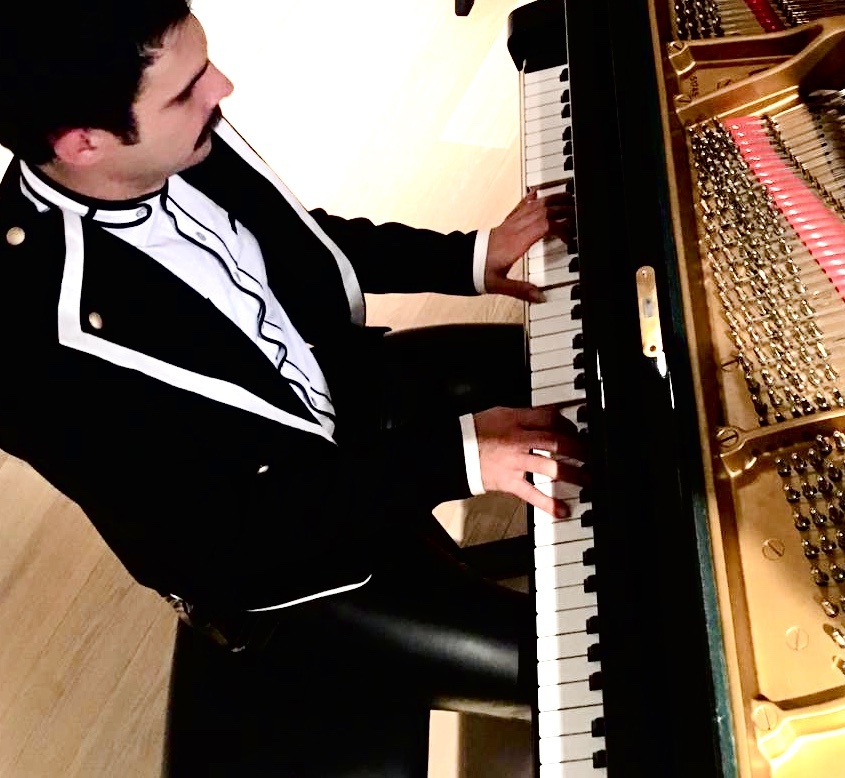 What was the focus of your MMus studies?

Coming from the Middle East, I mainly spent my MMus researching about the Eastern music and the 432hz tuning. I took the opportunity to dig into the mystery of music in relation to geometry, mathematics, chemistry and basically in one word, the occult.

How did your Queen tribute band come about?

It was the Freshers week in which me and some classmates decided to play some Queen numbers as one of the line ups for the night along some other amazing acts.

We seemed to steal the show as everybody seemed to connect to the songs on a different level. Very soon we decided to make an official tribute band and within the first year we managed to perform at the Grand Prix, Plymouth Rugby Stadium and some major festivals. I have also been doing solo shows as Freddie Mercury since then which led to some amazing adventures where I honed my performance skills and confidence.

You've enjoyed some huge success with act? What have been the highlights? And what's the secret behind a successful tribute act?

There are so many levels you can take a tribute act to and it depends on what tribute act you are trying to work on.

From pubs to stadiums making it believeable can help define the show. The truth is that everything is against the idea you are the actual real band. From the look of every member to the sound system quality and light rigs. So working on details is an absolute must. The more you pay attention to them, the greater the chance of success you have.

From the moment your tribute band enters a venue, you should act the part. I honestly feel like I am Freddie Mercury when I start the journey to the venue. Even if we stop at the services for a coffee break on the way to a show, I act like Freddie."

Could you talk a little about Los Bravos? How did you get involved with this iconic act?

Formed in 1965, Los Bravos are internationally the most successful Spanish band of all time. They shot to fame with their mega hit 'Black is Black' produced by legendary Ivon Raymonde in 1966. It reached number two in the UK charts, only losing the top spot only to the Beatles' 'Yellow Submarine'. As you do!

In 2019, Quentin Tarantino featured their iconic track 'Bring A Little Loving' in the first trailer for 'Once Upon a Time in Hollywood' bringing the world attention yet again to the Spanish rockers.

In summer 2019, I was belting out Mercury’s songs up and down the Mallorca in Spain as a part of my seasonal contract to work for a tribute agency. One of my open air shows happened to be near the home town of the founding members. He approached me during a break between my sets and asked if I knew of the band.

Obviously not knowing who he was, I did not pay too much attention, but after a quick search on Google that night I realised this could be a game changer. Next week, he came along with another founding member and the drummer of the band. They asked me to front the band as the original singer was not physically fit for joining the reunion. The offer was too good to refuse. 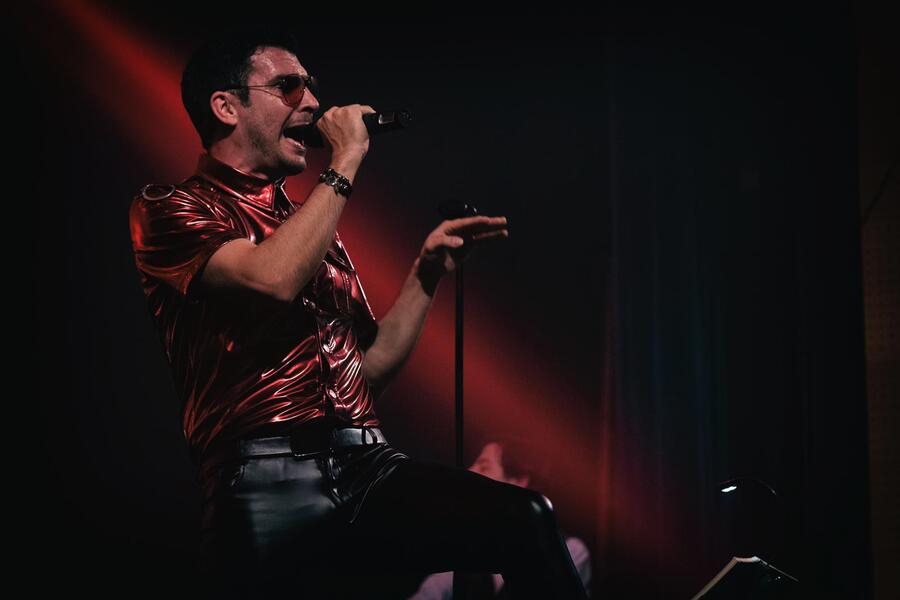 Is it daunting to work with them?

It is rather exciting for me. Being part of a band that has been around for more than fifty years with a global fanbase is thrilling. But I feel more responsible than just being a singer of the band. The big challenge is to convincingly fill the shoes of Mike Kennedy, Bob Wright and Anthony Anderson who have been fronting this band over the last 55 years. I need to make sure I can deliver in the style of what their audience are expecting to hear. I would like to make a transition with their sound, taking it from the sixties to today by gradually mixing the old school songwriting and melodies into modern music production. Although it seems very risky but I love taking risks.

I believe you've been writing and recording with them? How has this been going?

Yes, I have been taking an active role in writing and recording with Bravos as well as producing. I have co-written the first two singles and produced one of them as well as writing few more numbers for the upcoming album.

The Covid situation has had a major impact on our writing sessions and production plans but I have to say that I am learning a lot about remote recordings and working with other musicians online. You just need to be more precise and specific about your plans and decisions. You have less room to manoeuvre simply because you cannot spend time with your band in the same room. So every move should be analysed before being put on the table, otherwise it can take much longer to proceed.

I would like to explore more realms by connecting the past to the present and conveying some fresh ingredients to the future both as a solo artist and a band member.

I would like to know what Jagger, Bowie or Mercury would do if they were at my age living in the 21st century. There must be still some unknown places in music to tap into and yet to be discovered. Music is made of frequencies and so is the universe - it means the possibilities are limitless.

Listen to Los Bravos' 'Black is Black'  below.

by ICMP staff writer
February 23, 2021
Creators
Back to Blog Home