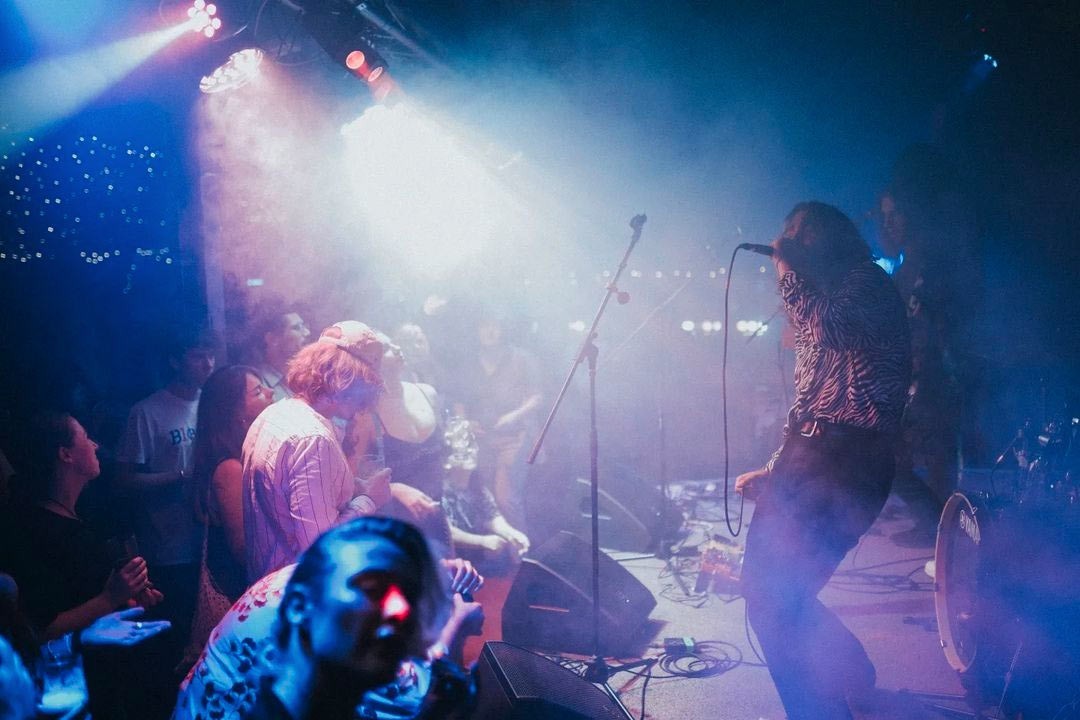 The sequel to The Camden Club Rocks, a series of events organised by the exuberant Sean Arkless of Hello Amnesia and ICMP alumni, took place on the 26th November at The Camden Club; and proved to be a delightful, successful night of good vibes and rock n roll.

Having attended the first night back in August, I knew I was guaranteed a good evening of live music and performance, and it was delivered just as promised. 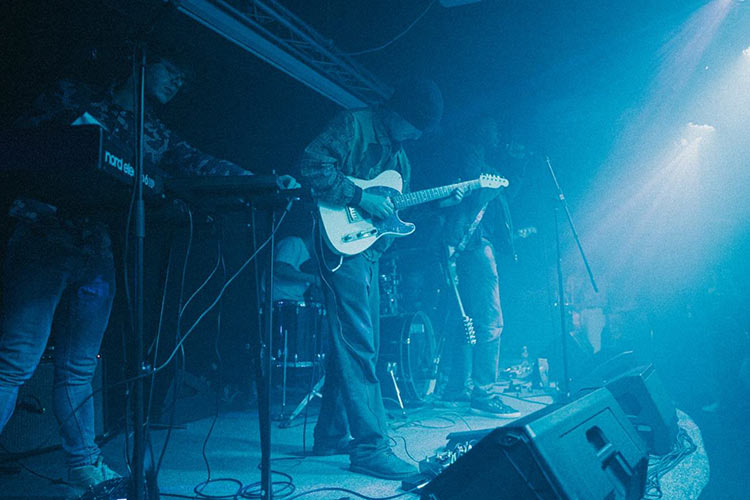 Krokodile is an alternative rock band. However, it would be a disservice to their sound to simplify them as such.

With their strive to create music from an eclectic amalgamation of genres, Krokodile offered a pleasantly strange aural experience, bringing us their own unique performance to kick the evening off."

It was like a soft introduction to what would become a high-intensity gig.

Naturally, the crowd started off with cold feet but that isn’t to say we weren’t dancing in one form or another; it didn’t take long for us to get into it.

What Krokodile had was soul with a bit of magic, focusing on how human we are and how real our emotions are. It was music that, as a listener, you can interpret in your own way to make it relevant and personal to you, and to feel on a transcendent level.

We were guided by Kam’s poetic writing, Joel’s guitar that never overstepped the mark, and Federico’s proficiency on the keys with backing vocals that added just that little bit of mystique to the atmosphere, yet we were still grounded by Ryuichi's solid bass and Chris’ grooves. Their inspirations come from a range of obstacles we face in our lives, including love, death, coming of age and more. Prior to the gig, the band had also just released their latest track called 'A Poor Man', which was played for us live.

Whoever was operating the smoke machine seemed to be listening carefully; as the lyrics 'living in the clouds' were sung, the smoke had gone off behind the vocalist creating such a distinct image, and as a result the operator received a shout out. Furthermore, there were free giveaways to anyone who was a new follower, a free lighter with the band’s name and logo written on the side. 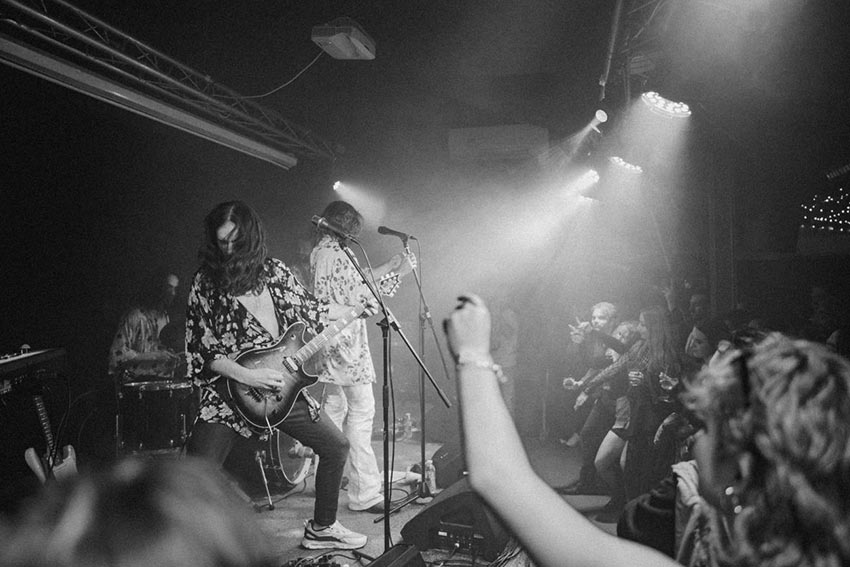 Up next was Hello Amnesia, a colourful explosion of psychedelic, funk rock, clad in their uniform of flower-detailed kimonos.

The best way I can describe their set is as an: ‘intense dance party’. I personally was excited to hear their latest release 'UTYLGO', a track that illustrates the individuality of each band member and shows how they all coalesce beautifully.

'UTYLGO' is a powerful track that encapsulates hard rock fused with funk and modern jazz - a recipe for swagger."

It contains such a simple yet suave drum groove by Sam, paired with Wes’ dirty, distorted bassline, and Marco enchanting us with an unsettling aura that left the crowd in a trance; to be happily disturbed by Kaan’s unapologetic guitar riff and Sean’s commanding vocals that added just that needed dash of drama - it was in that moment the room thawed, and the crowd and band aligned in wavelengths. Additionally, we were fortunate enough to hear some of their new tracks such as 'Mind the Gap' and (working title) 'Ramen Noodles'.

Hello Amnesia is a band of remarkable individuals that continuously strive to hone their craft and have confidently solidified their form of self-expression through their instruments, which is how they come to write songs that appeal to the current generation that seek things that are different yet rooted in tradition.

There were a few memorably comical moments throughout the set, such as when the instrumentalists performed a little jig in unison, Sean disappearing and re-emerging from the crowd, in-ear pieces vanishing, and particularly when Sam’s beater of the kick pedal had flown off several times unbeknownst to the rest of the band and audience.

While it would take time to re-attach, Sean had seemingly prepared for this moment and held up a sign with the words ‘awkward silence...’, which had been held up twice. To end their set was a kick ass medley of 'Whole Lotta Love' by Led Zeppelin and their song 'Suzy Blue' - a preparation of headbanging for the next group. 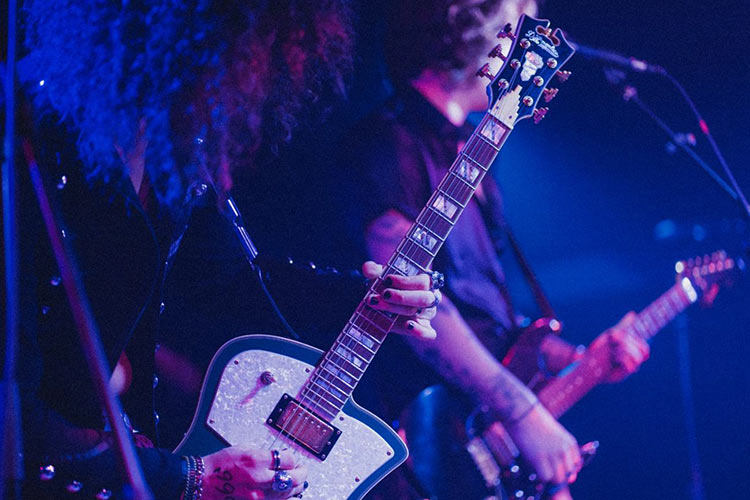 They are the children of AC/DC and Guns n' Roses, with their gruff vocals, guy liner, heavy tones, and harsh riffs. ICMP's poster boys for hard rock.

The turnaround time wasn't long between HA and The Thieves, but they started off their set with some difficulties between the levels and Alex's wireless system; unfortunately, the first song was performed without any bass, though they made the most out of the situation by laughing about it and so we laughed with them, as they cheered and clapped with the audience.

By the following song they were up and running smoothly. Their set was performed with such high intensity and vigour, it influenced us to engage in a frenzy of headbanging."

Halfway through their set there was a surprise guest appearance by ex-Thieves member and masters alumni (and Sam's pedal repairman) Pablo Amador Flores who was the previous drummer for the band, who went up to perform 'Cocaine Lorraine' as if no time had passed since his departure; a track with a punchy riff and funk-infused drum and bass solo that gets the crowd going. This was the band's way to give Paf a proper send-off and to pass the sticks from one drummer to the other. The band also performed their latest song titled 'Behind Your Back', and before we knew it the show was over. Then it was boogie time. 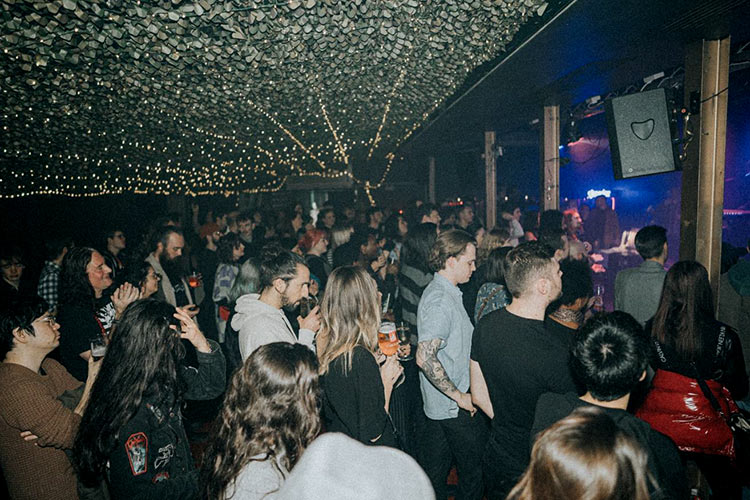 The venue was booked out until midnight where we had free reign to dance our hearts out to tunes ranging from Bee Gees to Meshuggah.

Just before closing, both performers and audience members formed a circle when 'Bohemian Rhapsody' by Queen came on, all of us linking shoulders and singing in conjunction. However, the night didn't end there. Those of us who were left split into groups, apparently per-frontman. One group ended up at the Camden Eye, another group at The Black Heart, and the last group in front of a pizza stand.

The night was a success on many fronts for all the bands; the event had sold out with 200 tickets, half of which were sold on the day. Although the night wasn’t perfect, happy accidents are what make memorable moments that invoke raw emotion."

Special thanks to Sean for organising such a fantastic event, along with the support of all the behind-the-scenes team that helped make it happen. The energy of the night was sustained from start to finish, and beyond.

Keep an eye out for announcements to come as Sean intends to continue the series of events in 2023 from February onwards, on the first Saturday of every month.

Hope to see more of you then!

by Theasherst
December 14, 2022
On the stage
Back to Blog Home