Students from the ICMP go on to do great things after they graduate, creating successful careers in music, and we love celebrating their achievements. This is the latest installment of our series of ‘Alumni Spotlights’, in which we talk to one of our alumni about what they’ve been up to since graduation.

In the spotlight this month is guitarist Agus Gonzalez-Lancharro. One of the first graduates of our BMus programme, Aguz has since made a name for himself as a guitarist, and more recently found himself working in the world of film.  Find out more about what he’s been up to since he left us:

Q: What have you been up to since you left the ICMP?

A: I graduated from the ICMP in 2010, as a matter of fact I was one of the first students ever to graduate in the Degree after the (back then brand new) partnership with the University of East London. I got the chance to play and tour with top rock artists across Europe, and do sessions here and there in UK, Spain and Sweden. As time was going by during my "guitar years”, I was getting more and more interested in composing and production and, specifically, the Hollywood business. I felt that the guitar was only a tool to me, and I needed to express my musical curiosity differently somehow, to be able to explore a bigger spectrum of the music world, genres and arrangement possibilities. I got truly inspired by our composing teacher there at the ICMP, Maurizio Malagnini, who encouraged me to pursue a career in that field. I took composing and classical harmony private lessons at his studio for around a year and a half, and also started a Masters Degree in Composing for Film and TV that I finished in early 2013. By then I was already trying to get some paid work in composing. It goes without saying that with no previous experience whatsoever, and not knowing any directors or producers that would give me a real chance to earn enough money to pay bills, I decided to take a risk and play the game with my own deck. I saw a shortcut to Hollywood in the marketing side of the industry and opened my own Music Production company, Really Slow Motion, where I am director, composer and producer. The company started up in March 2013, and when it was only 10 months old we were voted as Best Company of The Year, not even one year old. Ever since we have worked on around 150 Hollywood movies, I  personally publish our own material in the U.S.A. and we are signed with Warner Music for the UK and international sub-publishing.

Q: What has been the highlight so far?

A: There has been quite a few of them so far, like being featured in the "Captain America: The Winter Soldier” trailer premiere in Super Bowl 2013. Our music played for over 2 minutes in the TV broadcast and was viewed LIVE by 250 million people during the world famous “Super Bowl commercial break". But if I had to choose a real highlight, that has to be when I received a phone call from a Disney editor to collaborate with them with some cues for "Star Wars: The Force Awakens”. That has to be some sort of lifetime achievement to tell my grandchildren I suppose!

Q: Have you put what you learned at the ICMP to good use?

A: Absolutely. In this business it's key to be fresh with ideas and blend multiple styles. I have always been a lover of a broad range of music styles and I analyse them in many ways, without the need to actively play them necessarily, I just listen to them. Then, when you sit down to write or produce, those ideas will simply pop up instinctively, and that can definitely make a difference. Also, even though what I do now has very little to do with playing live, I certainly feel that playing so much with others in the past and in school, and understanding the other instruments of a contemporary band set-up helps a lot. I remember when I studied there we had this module that consisted in taking any song and re-arranging it for a full band format, including notation, in a completely different style. That exact same thing is something I do now in the current jobs I get. I have had the chance of being commissioned by film studios to re-imagine and re-record songs by The Eagles, Abba, Nine Inch Nails, AC/DC, Tina Turner... and themes like Terminator, Ghostbusters, Lord of the Rings... in multiple styles. It´s an honour and so much fun!!! 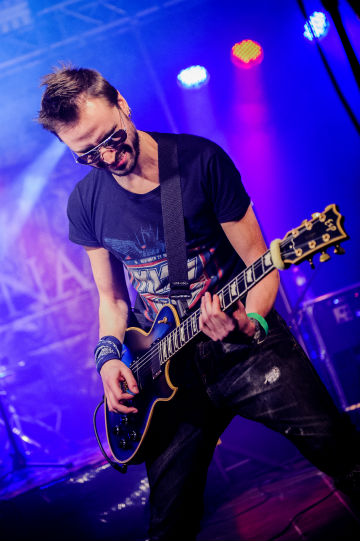 A: Recently, I just got informed that I have been granted permanent residency in the United States to be closer to my clients in Hollywood and expand the business from its core, and I will be relocating there very soon. I just can't wait to be there and see where we can get!!

Q:What would you say to anyone just starting out at the ICMP?

A: During my academic years studying music I was amazed at the huge amount of instrumentalists, fellow students and other aspiring professionals who didn't really listen to music at all. How are you supposed to become a sought-after and reliable musician if you don't even listen to music? It's not going to happen. If you want to succeed, listen to any music, even if you don't like it much, because that could trigger some priceless sound that can make the difference.

Also, you should listen to others, to what they say and play, listen to advice and learn from everybody. Keep your feet on the ground and don't ever think you are better or superior than anybody, because you are simply not, and you can learn even from the person that you least expect, always! Another piece of advice I would give is that aspiring professionals should keep their minds open to other aspects of the music industry besides the performance side of things. Playing an instrument to an audience is GREAT but you never know what's waiting for you round the corner. You might even get injured, for instance, and you should understand there are lots of things in the industry that you can do, enjoy and be successful at. Producing, recording, arranging, composing, publishing… It would be of huge use to you to know the basics of as many aspects of the industry as you possibly can.