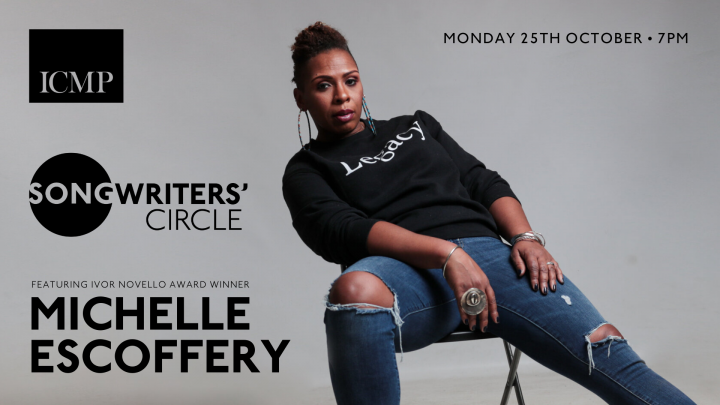 Open to all ICMP students, the Songwriters' Circle attracts musicians, music lovers and industry alike. You won't find a more unique, welcoming and intimate event whilst studying with us at ICMP. Our Black History Month special will feature Award-Winning British Singer, Songwriter and Vocal Producer Michelle Escoffery and will be hosted by ICMP tutor and artist Anjali Perin (Pokkisham).

Michelle Escoffery, an Award Winning British Singer, Songwriter and Vocal Producer. Having consistently amassed accolades as one of the UK’s most respected songwriters.

A member of family singing group, 'The Escoffery’s', signed to Atlantic Records USA in 1991, Michelle cut her teeth in the studio with sister Sandra Escoffery, learning to write and arrange, which led to independent success with chart topping UK girl band Truce. Michelle went on to become one of only 2 female stock writers at EMI Music Publishing at the time, alongside Cathy Dennis.

Ivor Novello Award winner for her song ‘Just A Little’ 2002 PRS Most Performed work, also chosen as part of PRS’ ‘Songs Of A Century’, a selection of the top 100 British songs from the last century. She has penned songs for Tina Turner, All Saints, Beverley Knight, Artful Dodger and worked on vocal arrangement and production for Rod Stewart song ‘Human’ and performed with Artists Stevie Wonder, George Michael and more. She has had recent hits around the world for international recording Artist Nabiha (single sat on the top of the airplay charts in Denmark for 40+ weeks) and SHINee (The last mini album was number 1 in 6 countries in 2015)

Her drive to showcase and champion emerging songwriters and performers shone in 2002 when she founded and ran 'Kindred Spirit' for almost a decade – London’s launch pad for creativity, live band performances and one of the cities most revered live shows. Michelle continues to advocate and develop new talent through creative vehicles and platforms such as her event 'Front Room Sessions', being a UK judge for Eurovision Song Contest 2018 and Vocal Coaching for various TV shows.

This event will take place at ICMP where you can attend in person, or you can watch the stream of this special event on our YouTube channel.