ICMP students were recently treated to a visit from legendary indie-guitarist, songwriter and award-winning music producer Bernard Butler. We caught up with him before the session for a quick chat... 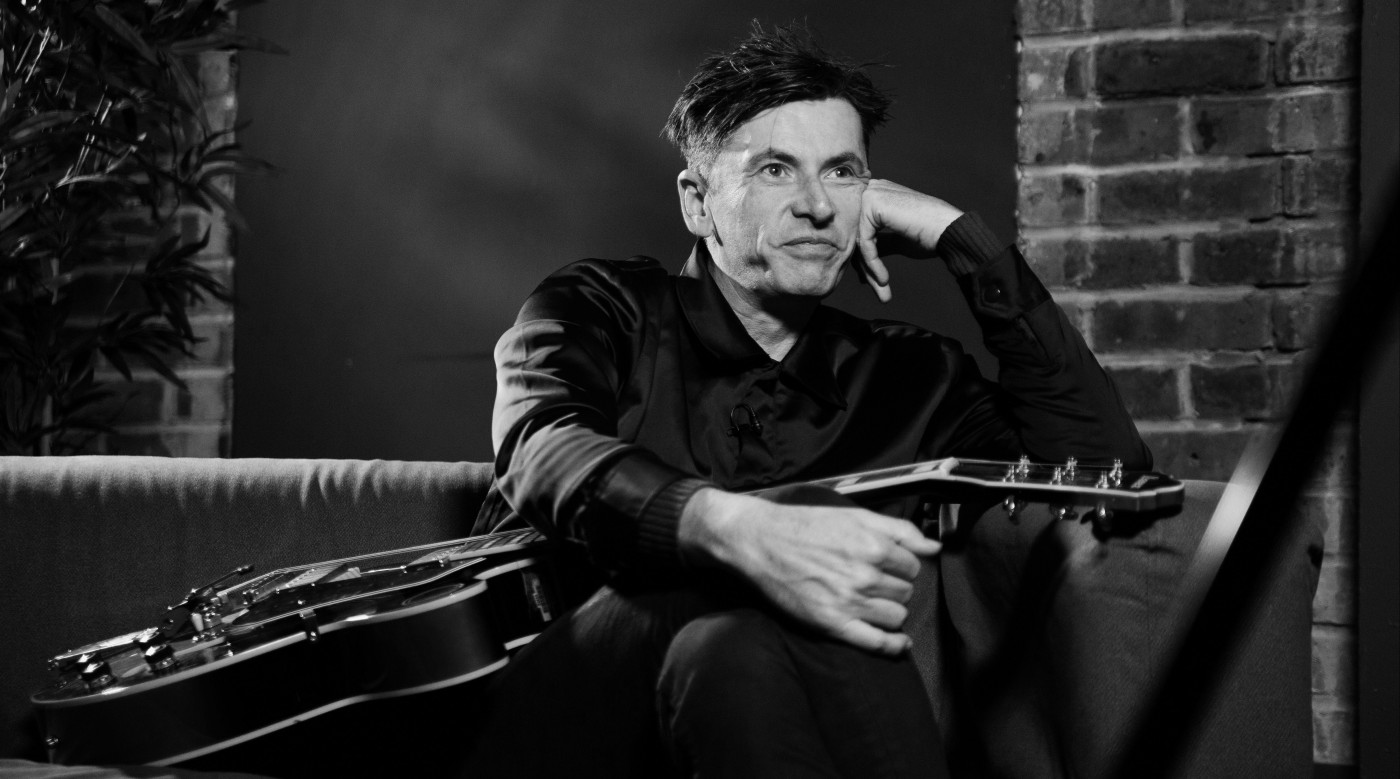 Starting as a guitarist in the highly-influential indie band Suede, then enjoying success with the McAlmont & Butler project, a solo career and producer for artists like Duffy and The Libertines, it's unsurprising that music industry legend Bernard Butler is a great raconteur.

Bernard recently joined us for an exclusive 'In Conversation' masterclass, hosted by long-time friend, collaborator and ICMP tutor Catherine Anne Davies, aka The Anchoress.

In the session, Bernard talked us through his career highlights, sharing fascinating and amusing anecdotes relating to the artists, bands and records he's worked on. We even learned that Suede's 1993 debut album - at the time the fastest-selling debut album in British history in almost a decade, which debuted at the top of the UK Albums Chart and won the band the Mercury Music Prize that year - was recorded in Kilburn, just around the corner from ICMP!

Alongside personal stories and insight into how some of his best-selling records were written, Bernard kindly shared his wisdom with our students including top tips for working in the studio and getting the most from songwriting sessions.

We caught up with Bernard before the event for a quick chat...

Your career has evolved from performance to production to film scoring and now you’re a radio presenter too. What’s your ‘favourite place’ when it comes to your job?
My favourite place in music is being next to music. I couldn’t list all the things I’ve done or the people I’ve been with, but whenever I try to answer this question my advice to everybody is: be in the room, don’t worry about being the guitarist, vocalist, producer, the star... the great moments happen when you allow yourself to just be somewhere.

If you put yourself in that space, then you’re near something and part of it - whether you're clapping your hands, playing the tambourine, singing or whatever - and you’ll allow yourself to be touched by magic. That’s my way to look at things … Well, it took some time to evolve to this, but I’ve now known it for a while. 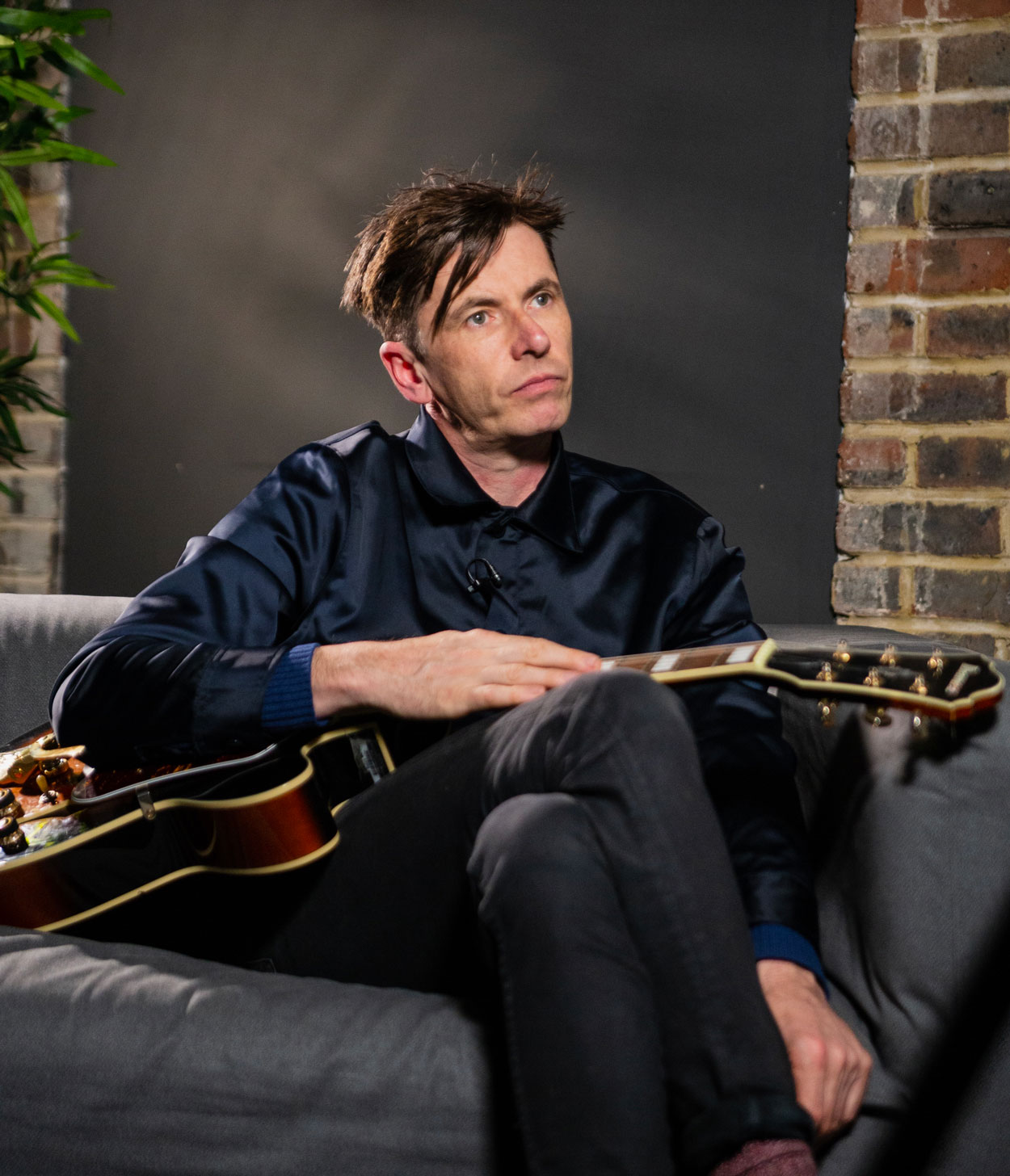 Is there anything else you would love to do in your musical career and haven’t yet?
Learn the cello… or the violin, again. Be a great composer! It won’t happen, I have to accept it. But to be a fantasy cellist, it’s what I've always dreamed of. I played the violin when I was a kid and gave that up to play the guitar. Which wasn't a mistake in retrospect, but I now always watch violinists and wish I had continued with it.

But I don't think there’s anything in particular I’d want to do, or any specific person I'd want to work with. With music, you have to have the mentality that you don’t know what’s gonna happen tomorrow. In music you genuinely don’t. That’s the thrill, the excitement. As a musician, that’s your way of life. It's not always a steady job. You get ups and the downs, but that’s the nature of it.

You've produced and collaborated with many different artists. Was there ever a time when you didn’t like their material but you were able to work on it and separate your ‘musical self’ from your job?
That’s a good question! We all listen to music all the time and don’t necessarily love it. When I get the opportunity to work with certain artists or people, it’s not always because I love what’s in front of me, it’s because I see an opportunity, a creative, opening.

I like to treat the records I produce as if they were mine. I’m quite critical of them and I want the best tracks to go on them, as I would do with my own stuff. I want the best possible thing to happen!

There could be a great voice or lyricist, just someone with a vision that is not fully realised. They are what I always look for. Quite often the finished product might not be there in front of me but that's what is exciting.

I’ve done things where I've thought the song isn't good enough and normally I just say it. Sometimes it’d be the last track on the record so instead we'll go for nine tracks on the album rather than 10. If you’re not sure, make it shorter. You need to be diplomatic and find a way to deal with it. 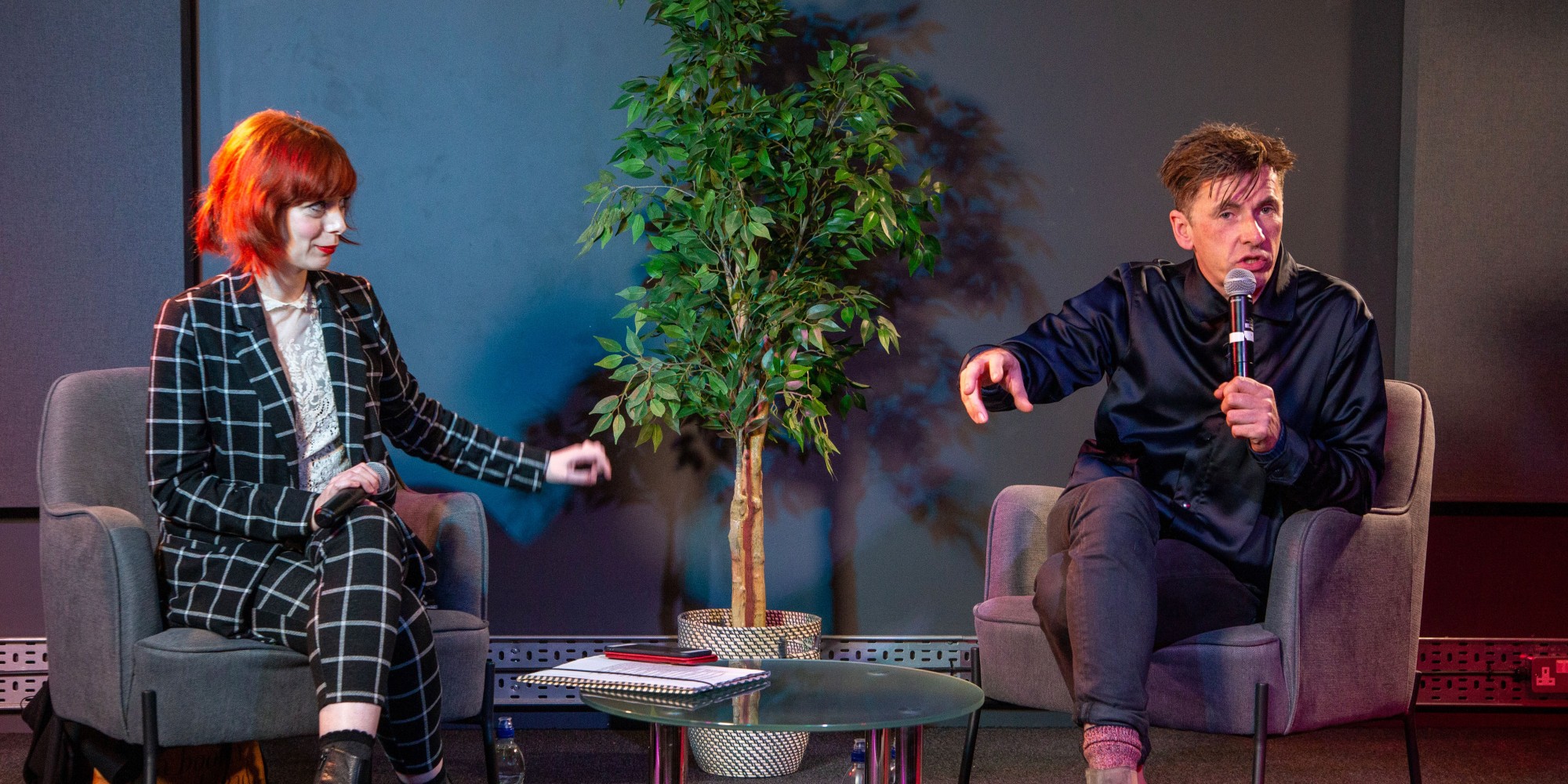 How was your experience with The Libertines when you produced their single ‘Don’t Look Back Into The Sun’?
Dreadful. My experience was awful although the result was pretty good though. Sometimes I’m out, sitting in a pub, the song comes on and I can see that people still love it. Was that a great experience? No, it was the worst two weeks of my entire life! I’d do it again tomorrow though, exactly the same way, for the same results - that’s what matters, what’s left for people to enjoy. I love that feeling.

They (The Libertines) were people with a vision; everything from their haircuts and clothes, to how they were living their life, and the jokes they were making. They were the definition of having a vision. I spent a lot of time around them, then unfortunately witnessed them deteriorate. It wasn’t funny to watch. It was the first time I was producing, because I had worked on their first record, but I didn't end up recording because I became ill - partly because of them! They then called me back to work on ‘Don’t Look Back into The Sun’ a year after. Their lives were starting to be crazy. It was stressful and being my first time I thought that was the norm. I have since learned that that’s not the standard for a record producer.

The Libertines are such a myth and a legend but it’s never really talked about how their health and lives fell apart! The biggest shame of it was seeing the creativity going away. That was really a sad time for me. 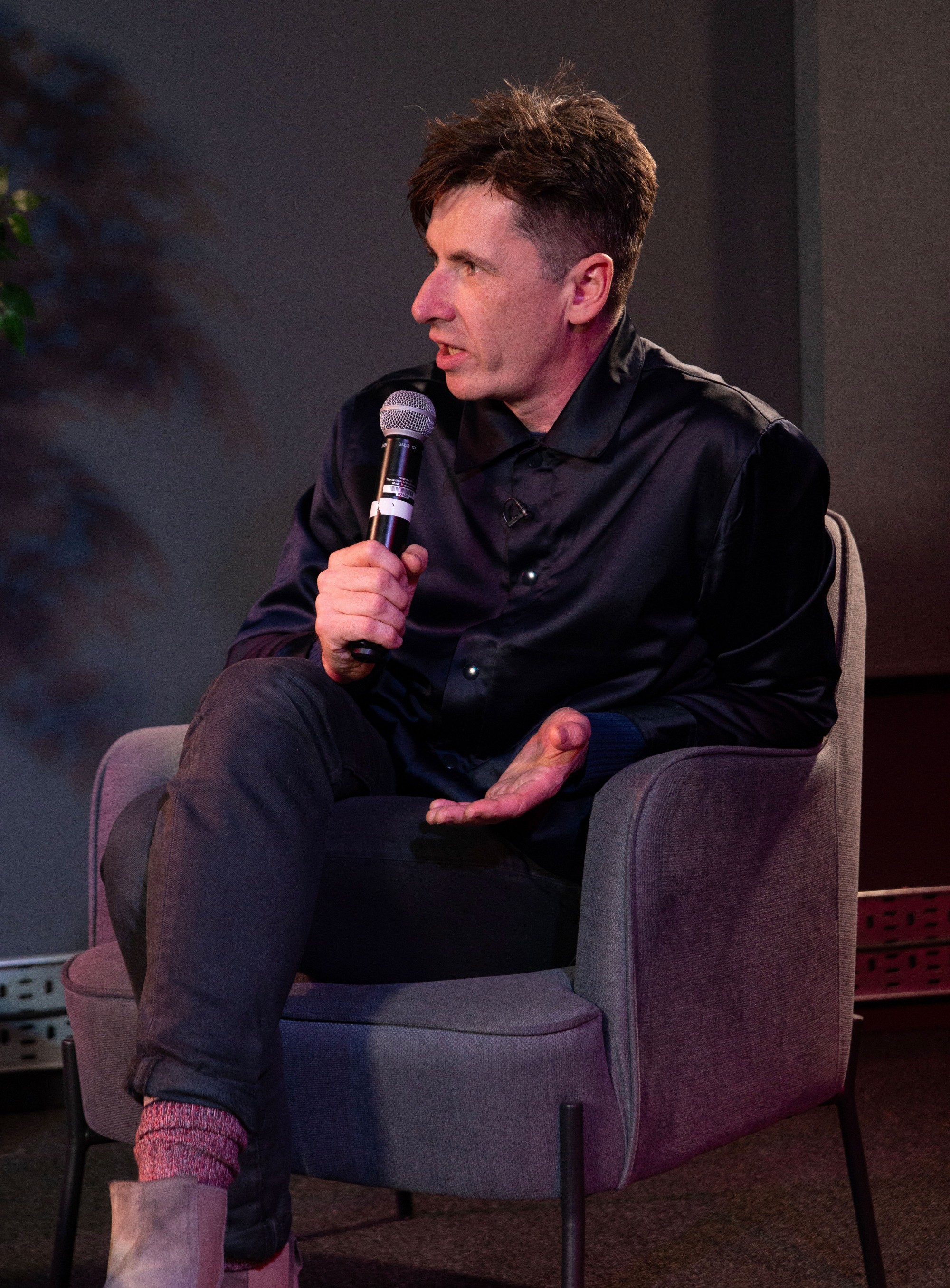 What’s the best piece of advice you would give to a musician getting in the studio for the first time with a producer?
Be the producer yourself. I think all musicians are producers. You definitely are if you’ve got a vision in your head, if you’ve written a lyric, and you have some kind of idea about who you are already. Then that’s half the job of the producer.

If an artist doesn’t have a vision in the first place, I’m not interested. I love people with character, an idea of what they want, something creative they want to achieve. It could be the way they look, their clothes, their haircuts ... I need to sense that they know who they are and what they want to do; their personality.

Don’t think that this person - the producer - will be there to do everything for you. It’s about having creative ideas and being bold enough to say them. Sometimes you don’t know the technical side of things, but that isn’t producing at all in my opinion. It’s the vision, the creative side that is important. Having belief in yourself.

Producers can be like stars sometimes; people treat them with almost a little too much reverence and respect. They could be older, or very famous; they might make you feel like you’re not worthy. In the end, they’re just people in a room. So remember your ideas are equally valid and worthwhile.

We'd like to thank Bernard for taking the time to share his stories and wisdom with our students.

If you’d love to follow in Bernard's footsteps and become a musician, maybe a songwriter or a producer, ICMP’s courses will get you started. You’ll be taught by exceptional tutors, absorbing their knowledge of everything from instrumental technique and performance to production fundamentals, theory, business, marketing and more. You’ll also get access to our studios, practice rooms, masterclasses, special events, and world-class equipment, while building your network of contacts, collaborators, and friends.

by Lara Magnelli
December 3, 2019
In the studio
Back to Blog Home