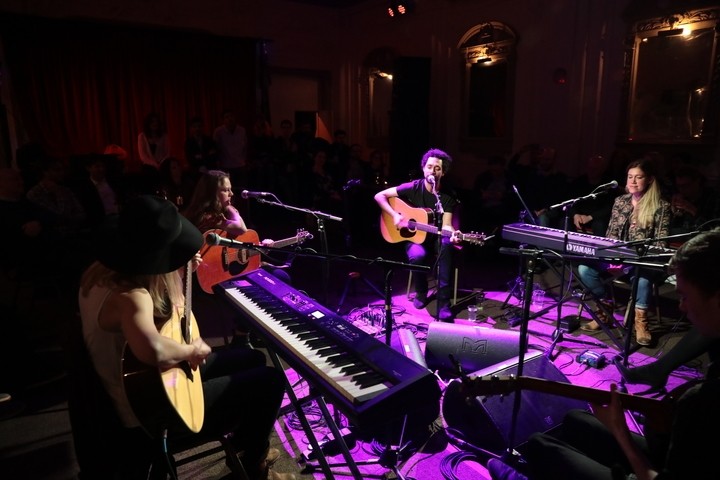 We were delighted recently to hold our final Songwriters' Circle of the current series at the renowned London music venue Bush Hall, which featured Ben Earle of The Shires as our very special guest performer. With its incredible acoustics, ornate decor and chandelier lighting (plus an incredible pedigree as host to some of the finest global musicians and performers, including Adele, Amy Winehouse, Ed Sheeran and Laura Marling) Bush Hall very much enhanced the intimate and inspiring atmosphere of the Circle.

Having just returned from Australia where The Shires played debut shows in Sydney and Melbourne and a slot at CMC Rocks QLD 2017, Ben joined one of our best ‘writers’ round’ line-ups yet, led by ICMP's Head of Songwriting, Sophie Daniels and featuring two ICMP Songwriting degree graduates who are both rising stars in the music industry: Hannah Rose Platt, who recorded her debut album in Nashville last year, and Jessica Sharman, who also treated the audience to a duet with fellow songwriter and fast rising UK Country star Liv Austen.

Jessica has built a very active career behind the scenes of the industry through writing and producing. She recently co-wrote much of the Ward Thomas album ‘Cartwheels’, which became the first the first album by a UK country act to reach number one on the UK Albums Chart and has since reached silver sales in the U.K.

“Music is the only art form that transcends any barrier."

Alongside the writers' rounds Sophie Daniels also lead an ‘in conversation’ style masterclass with Ben Earle in which he talked about his career experiences and advice for aspiring writers and performers. He described the ups and downs of being a successful recording artist, admitting that he still fears what comes next.

During the event Ben expressed how pleased to be part of an event that felt so much like the traditional Nashville rounds and have him the opportunity to play new songs. He talked about the ambitions he has fulfilled so far and hopes to achieve in the future such as making the next album a big success and writing songs that are worthy of stadium performances. He believes that it is an exciting time for all artists with access to online platforms and Country/Americana, in particular now that it is growing in popularity, and expressed his hope that the next step will be for a U.K. country artist - be it The Shires or not - to really break into the US market.

In terms of music and songwriting as a discipline, he stated his belief that music is "the only art form that transcends any barrier" be it race, age, gender etc. and professed his love of co-writing and developing work with others. Ben advised the students to write honestly from the heart, be true to themselves and always finish songs, he stated that it is always better to have something finished than a brilliant idea or ideas that never see completion. 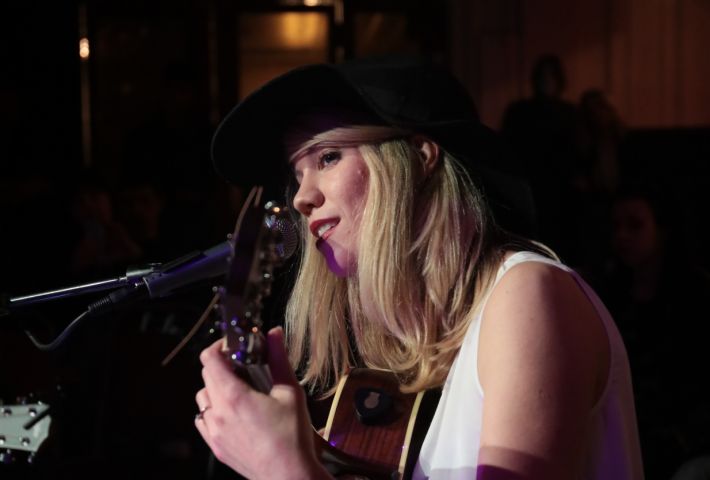 What did they say?

Not surprisingly, the event drew fantastic attendance - not only from ICMP students, but also a strong contingent of country music followers and fans of The Shires, which made it a great opportunity to expose a wider audience to both ICMP talent and the fantastic events and opportunities the college can offer its students and alumni. Here are some of the comments after the show:

“I think it’s really great that you guys have a songwriting degree course and hopefully the next generation of songwriters are going to come from this amazing place”.

“ICMP have laid on something pretty special tonight. This Songwriters’ Circle is probably the best thing I’ve been to in ages…. it’s just leaving me on a complete high.” Ray Jones of Time Out London

“Anyone doubtful that the UK can produce musicians capable of both writing and performing Americana needed to be at Bush Hall this evening where students past and present from  ICMP demonstrated their undeniable talents”. Lesley Hastings

“I love Songwriters’ Circle - you get to network with everybody in London who is a great songwriter and hear all the fantastic music…. I suggest anyone should come down to watch it, whether you are a student, alumni or a member of the public.”  Paul Usher, Songwriting degree student

“Playing my songs in a room where I know my favourite songs have been played is absolutely amazing.”  Kaity Rae, Songwriting degree student

What is the Songwriters’ Circle?

This is a monthly event led by our highly-experienced songwriting teachers and music industry professionals. Open to all, ICMP’s Songwriters' Circle attracts writers, musicians, music lovers and music industry executives, encouraging a unique and diverse blend of people to come together to discuss and enjoy quality songwriting. Staged in an intimate setting, the audience gets an exclusive opportunity to hear songs in their most stripped-back form, with the songwriters themselves sharing personal insights into how the songs have been created.

The Circle is always curated to include established writers as well as talented, up-and-coming ICMP songwriting students. Recent special guests have included Ben Earle of the Shires, Frank Turner and Ed Harcourt, as well as ICMP graduate Elena Tonra from internationally-acclaimed act Daughter.