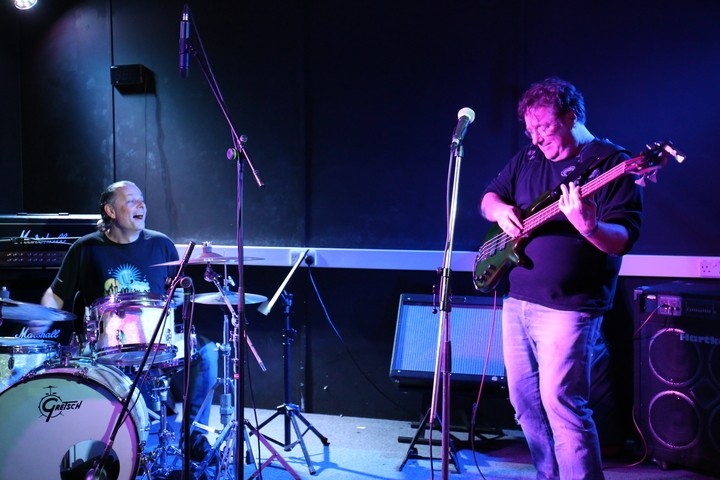 ICMP recently brought together Ralph Salmins and Stu Hamm, two of the world’s most prolific session musicians, for an exclusive joint masterclass about rhythm section playing for bass and drums.

Having met just a few hours before the masterclass, these highly experienced musicians truly showed their skills as they instantly gelled both as colleagues and instrumentalists, playing tracks from each of their repertoires. The two filled the room with energy and enthusiasm and shared their vast knowledge from working in the industry for a number of decades.

Amongst the areas covered during the evening, Ralph and Stu stressed the importance of always being disciplined and prepared for any session or gig one is booked for. They shared their belief that musicality is more important than technique, and how important communication is between musicians sharing a stage. They also gave some great advice about how to become a session musician and, importantly, how to avoid injury throughout one’s career. And one key message came through - whatever happens, being a musician should always be fun! A packed house of ICMP bass guitar and drum degree students were spellbound as the two legends demonstrated unbelievable technique and musicality, with first year bass guitar degree student Carlo Garella described the event as “one of the best masterclasses [he had] ever been to”.

Why studying music is worthwhile

With such a complex and diverse music industry out there, it is always good for students to hear that by choosing to study music at a place like ICMP, they are making a sound choice, giving themselves real opportunities to improve as a drummer or bass player. As Stu Hamm commented during the masterclass:

I think that it was a good lesson for the students to see what two musicians who take their job seriously (and LOVE their job as well!) can do when they speak the same language. Thanks to ICMP for making this musical connection happen!

We know that getting started as a session musician is a challenge and by studying on a degree course at ICMP’s London campus, aspiring musicians get a great understanding – and receive inspiration from professional players such as Stu and Ralph! – of the music industry and how education can help them get ahead.

Great musicians and a great masterclass!

After such an engaging and comprehensive masterclass, with a room full of students currently studying bass guitar or drum degrees having received fantastic advice and top tips from two legends of the music industry, both Stu and Ralph expressed how much they had enjoyed their time at the ICMP and the chance to work together. Stu commented: “What an extreme pleasure to meet and make music with Ralph Salmins! I had heard of him and his groove, but we had never met or played together...what a pro! I see why he is so highly regarded and sought after. He had charts for the two songs I sent him and played his ASS off....and he was so easy to play with and has HUGE ears."

Fancy studying a Bass Guitar or Drum course in London?

If you're a Bassist or Drummer and would like to benefit from the wealth of experience and connections offered by ICMP then it's not too late to apply. We have courses starting in April and September 2017, find your course today or visit one of our Open Days to see our facilities for yourself.

About Stu Hamm and Ralph Salmins

Stu Hamm has firmly established himself as one of the most influential electric bassists of the past half-century. He has done so through both his innovative work as a solo artist and his contributions as a sideman to Joe Satriani and Steve Vai. Extending the non-traditional function of the electric bass previously revolutionised by Jaco Pastorius and Stanley Clarke in the 1970s, Hamm helped to reshape the contemporary concept of the bass guitar as an unaccompanied instrument with the utilization of polyphonic, two-handed tapping, slapping and popping techniques, chords, and harmonics.

Ralph Salmins is the drummer of choice for producers and composers worldwide. He has performed or recorded with some of the world’s finest musicians and artists, including Paul McCartney, George Martin, Elton John, Madonna, James Brown, Tom Jones, Mike Oldfield, Quincy Jones, Diana Ross, Paloma Faith, Jeff Beck, Alice Cooper and Wynton Marsalis. Ralph’s key chart hits include Bjork’s ‘It’s Oh So Quiet’ and Robbie Williams’ multi-platinum ‘Swing When You’re Winning’ album and DVD. He has also worked with some of the greatest movie composers including Hans Zimmer, John Williams and Howard Shore, and played on the soundtracks to over 150 movies, including Bridget Jones’s Diary, Harry Potter And The Prisoner of Azkaban, Prometheus and BAFTA Award and Oscar-winning movies Gosford Park, Moulin Rouge and Lord Of The Rings: Return Of The King.
Ralph said at the end of the masterclass:

A fun night was had by all…Stu is a monster and we had the chance to play some music and help young players gain knowledge. Thanks ICMP and see you soon.