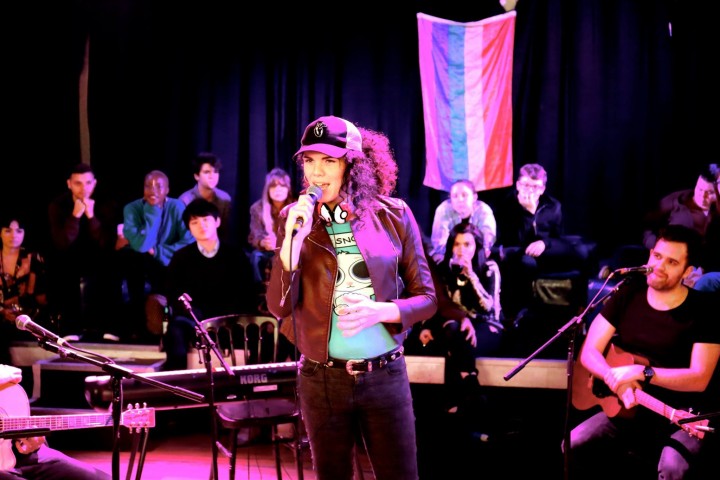 The ICMP was proud to host two special events as part of LGBT History Month this February, focused on the promotion of LGBT artists.

This year’s LGBT History Month celebrates the idea of diverse communities and uses the fingerprint logo to represent the fact that every person in a community is different and unique.

First, ICMP hosted a dedicated Songwriting Masterclass with special guest Jordan Gray (Tall Dark Friend) who was in conversation with ICMP Songwriting Programme Leader Jonathan Whiskerd.  Jordan was a semi-finalist on BBC’s The Voice in 2016 and made TV history as the show’s first ever transgender contestant. She talked extensively about her career, writing and experiences as a transgender artist.

Following this masterclass, ICMP hosted a fantastic Songwriters’ Circle at Proud Camden celebrating the diversity of its own student community, and featuring LGBT artists Paul Usher, Foxgluvv, Eden Tredwell and Adam McCullogh, who performed and discussed their work. The event was a sell-out; the performances from ICMP students were fantastic; and the atmosphere of enjoyment and camaraderie in the room was something to behold.

Following the event, Jordan spoke to ICMP about the evening and had this to say:

It was a privilege to be here. The magical thing about music is the subcultures that arise, and it’s really nice to see these underground events emerge and become so strong. This is a real meritocracy. When you put something together because it’s a passion and it keeps working anyway, then you know you are onto a winner. It’s not engineered in any way. Songwriting is a weird discipline because unless you’ve got the right question in your mind at the beginning it can go badly awry. If you start writing based on what you think that people want to hear, then you are in the wrong industry – that’s not how it should start. But you can tell these are real artists with sincerity and integrity. I’m here because I Iike being a part of anything that’s sincere.

About the Songwriters' Circle

Songwriters’ Circle is a regular ICMP event led by ICMP’s songwriting faculty, which includes a Mercury Music Prize Nominee and a No 1 UK writer. Taking place in an intimate setting, the audience gets an exclusive opportunity to hear songs in a stripped-back format, from both well-known writers and talented, up-and-coming ICMP students. Special guests this season have included Frank Turner, Ed Harcourt and Sam Duckworth (Get Cape. Wear Cape, Fly).