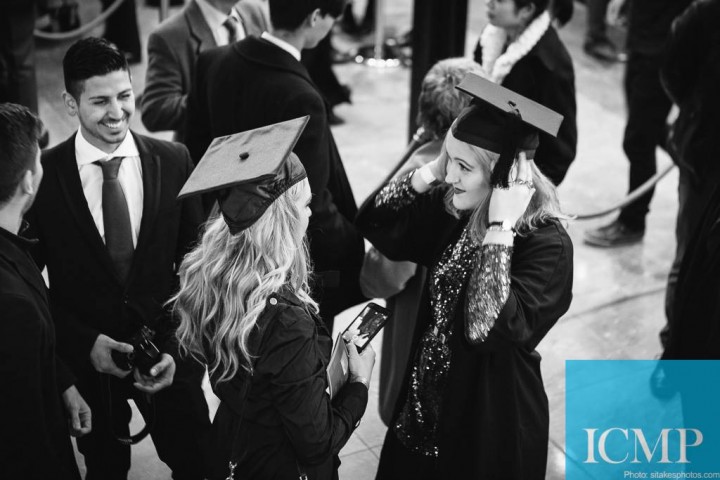 ICMP held its annual Graduation event on Saturday November 5th at the prestigious Mermaid venue in central London. Over 200 students graduated from their undergraduate and postgraduate courses this year, and the theatre was packed out with hundreds of family, friends and supporters who were there to enjoy their fantastic achievements.

246 students succesfully graduated with full honours degrees, 7 graduate with some form of exit award. 11 out of 12 MMus students gained their full award (the last is due to submit his re-sit research project in Jan) and 62 students out of 66 passed the Higher Diploma this year.

At the event, guests enjoyed live performances from ICMP students Norell & The Dub Factory (Eleonora Vella, Carlo Andrea Salaris and Akira Kikuchi and Sam Rogers). These live showcases demonstrated both the skills and the future potential of ICMP’s graduates, many of whom are are already making waves in the music industry, for example Rive, with the release of their latest track ‘Eyes Closed’ and building a following at festivals over the summer, and Gabi King, a current drum student, who has appeared on Jools Holland and is currently on a US tour.

Many more from this talented crop of graduates will no doubt go on to join such notable recent ICMP alumni success stories such as Elena Tonra of Daughter, Andrew Davie of Bear’s Den, Luke Patterson of Clean Bandit, Shaun Smith, better known as the artist ‘Stealth’, Drummer Joel McBride, who has been supporting Bastille on their UK tour with his band Jagara, Swedish Death Candy and Jessica Sharman, who has written 5 tracks on the number 1 best-selling UK album by Ward Thomas.

Paul Kirkham, Chief Executive at ICMP who spoke on the day, said: ‘Attending an ICMP graduation event really highlights how talented, committed and hard-working ICMP students really are. It is a humbling experience and a reminder of why we look forward every day to coming to work to support them during their time at the ICMP. Their continuing success is a source of great pride to us.  This year, we had the highest-ever number of first class degrees awarded, and we know that within 6 months of graduating, over 90% of our graduates are in employment or further education; around two-thirds are engaged in music-related jobs or study; and the average salary of ICMP graduates is almost 12% above that for arts graduates. Seeing how they work, how they apply themselves and how they make the most of their abundant talent and creativity, these results are no surprise.’

Having completed the graduation ceremony and after enjoying a great weekend of celebratory events, all the newly-minted ICMP graduates are no doubt already hard at work shaping and building the future of music!